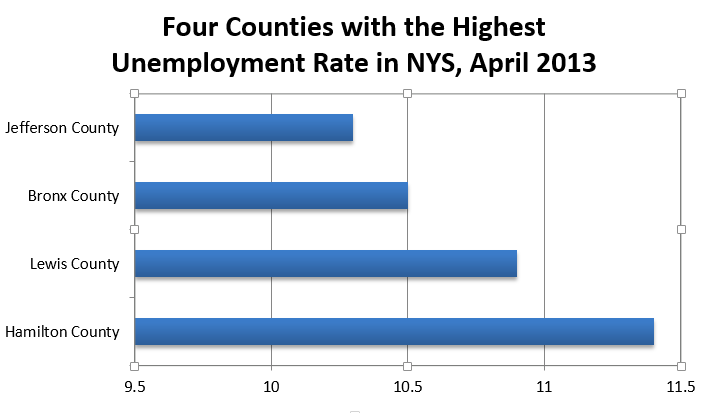 A recruiter in the Bronx sits for seven hours in a small 6-by-8 cubicle office answering phone calls from unemployed residents struggling to find jobs.

Andrea De La Cruz, a mother of two, is an account manager for a recruitment team of the Federation Employment & Guidance Services, a nonprofit, and the Bronx Workforce1 Career Center, operated by the New York City Department of Small Business Services. This partnership provides Bronx residents with employment and recruitment services.

“What we are doing is, indeed, working,” said Bronx Borough President Ruben Diaz Jr. in a news release. “This drop in unemployment is not simply a result of people coming off the unemployment rolls, but also of more people finding jobs and getting to work.”

Still, many Bronx residents struggle to find a job.

“My last job, I stayed there for two years, but I been out of work for two years because I was laid off. Ten people were laid off that same day; it was horrible,” said Keyomia Kennedy, a mother of three, who was laid off from Basic Inc., a drug rehab facility for men.

Kennedy went to ASA College for an associate degree as a medical assistant and is currently finishing a Registered Nursing degree at Bronx Community College. In 2009, she was working as a medical coordinator at Basics Inc., making sure that men had doctor visits, took medication on time and went to health seminars and counseling.

“Bronx County, N.Y., has a population that has far less education than New York’s other four boroughs,” said Gary Burtless, a Senior Fellow in Economic Studies at the Brookings Institution, in an email. “In general, throughout the country, working-age adults with less schooling tend to have higher unemployment rates.”

Since 2011, Kennedy said she had been to six or seven job interviews in health care. She’s been offered a few jobs, but not at a salary sufficient to support her family. “Where I feel like I can’t survive off it then I won’t take it,” she said.

Dennis Harrison is a single, 39-year-old New Yorker who went to Fordham University for a bachelor of arts and Columbia University for a master of arts in education. He then worked as a history teacher at the Susan McKinney high school in Brooklyn.

“I was the last one hired, so they were reducing the amount of history teachers from four to three,” he said. He was the first one let go, because the other history teachers had much more experience.

In 2011, President Obama proposed The American Jobs Act,  hoping to provide $35 billion to prevent layoffs of up to 280,000 teachers. Congress failed to pass the bill.

Kennedy relied on unemployment checks until they ran out and recently applied for government assistance. She receives $500 a month, which is not enough to support her three young kids. “The amount is unrealistic, but something is better than nothing,” she said. “It’s a struggle, but I’m getting by the best way I can be.”

Harrison is earning a small amount as a part-time substitute teacher.

“I was smart enough to keep my substitute license.” Harrison said.

Kennedy and Harrison are optimistic that they will find a job in their fields.

“Normally, I’m pessimistic, but I learned from my grandmother to keep it more optimistic,” Harrison said, “If you don’t think positive, something bad is always going to happen.”