No Rest for Holiday Workers

While many people enjoyed Thanksgiving meals with family and friends and started their holiday shopping early on Black Friday, these New Yorkers were on the job, representative of a large segment of the workforce that does not get days off on major holidays. Some missed the holiday festivities; others welcomed the opportunity to earn much-needed pay. 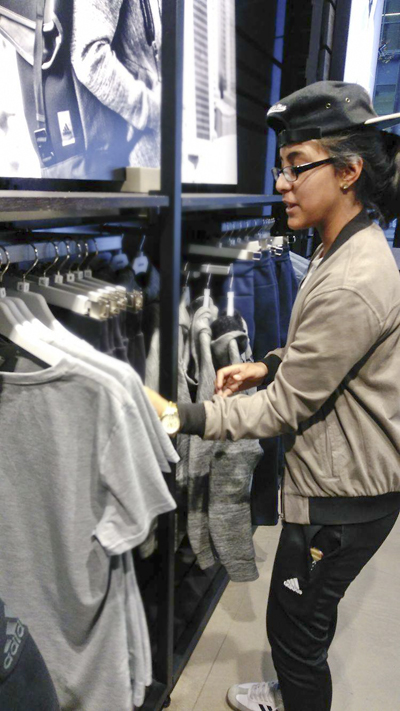 At 3:30 a.m. on a chilly fall Black Friday morning, most people were tucked in their beds sleeping off their Thanksgiving dinner meal, but Sadiana Chowdhury was barely able to keep her eyes open on her morning commute from her family’s apartment in Pelham Bay in the Bronx to the Adidas store on Fulton Street in Brooklyn, for the biggest shopping day of the year.

“It’s a pretty good shift for Black Friday, at least I get to leave by 2:30 p.m and get some rest before I do it again for the next two days,” said Chowdhury, a head cashier at the Adidas store and a senior majoring in finance at Baruch College.

“My family and I do not do too much for the Thanksgiving, so I don’t feel like I am missing out on too much on that end, but I do feel like I am missing out a bit on having a five-day weekend. Thanksgiving weekend is always a bit stressful for me regarding working four days straight and still having to get my homework done for Monday, despite how tired I am,” Chowdhury said.

Her store opened at 5 a.m. on Black Friday, five hours earlier than a typical Friday. “I was sitting in the store with nothing to do for two hours until the customers finally started trickling in at 7 a.m. I prefer that there are customers than none, so my day goes by much faster,” said Chowdhury. “Once it got busy my shift flew by. It was definitely busier than a typical day, but nothing compared to last Black Friday. It was a good day overall.“

“I’m a pretty positive person, so the stress of retail doesn’t ever really get to me. Plus all of my coworkers are cool people that I can respect and Adidas is a great company to work for,” she said. “I hear about my friends working at other retail places and I realize how well I am being treated.”

Chowdhury is leaving the Brooklyn store in June for a summer finance internship at JPMorgan Chase in Manhattan. Looking at what she has learned over the last four years, she said working in retail helped her learn some tangible skills about money. Monthly sales goals, zeroing out the cash register every day and keeping track of returns helped her understand the everyday transactions of a business.

“I’m going to miss my coworkers and the perks, but it’s been three years. So it’s time for me to move onto the next thing,” Chowdhury said.

For Sam Ozcan, 35, who drives a horse-drawn carriage around Central Park, Thanksgiving means something other than a family gathering with turkey on the table. As a festive mood spreads across in the city, tourists and residents flock to the carriages. Ozcan, who emigrated from Turkey to the United States 11 years ago, said the holiday season was an opportunity to earn good money before January, the start of the business’s slowest season.

“I don’t feel sorry for myself working on Thanksgiving,” said Ozcan. “What I feel sorry for is a financial matter. If my family asks me to get something, and I am not able to do that, it hurts me more than not being able to be with them during holidays.” 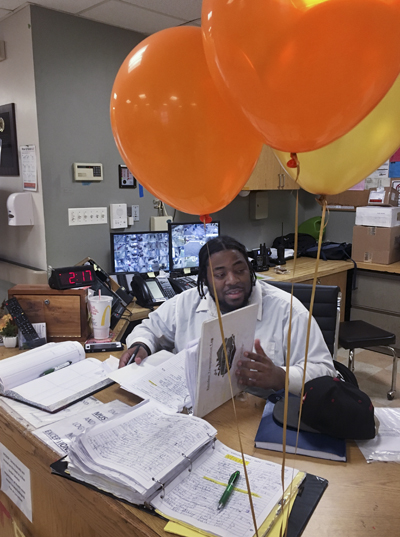 Festive balloons line the halls of the Brooklyn United Methodist Church Home for Adults in East New York, Brooklyn. Behind the front desk sits Kenny Jose, a 28-year-old security guard who is working not one, but two shifts on Thanksgiving, starting with his overnight maintenance job at the Pennsylvania Hotel in Midtown Manhattan, then the afternoon shift at the center. “I’ll get home around 7 p.m. just in time for Thanksgiving dinner with my family,” said Jose.

He said he didn’t mind working on Thanksgiving because he enjoys his job. “I like coming here because of her,” he said, pointing to a wheelchair-bound woman who sits at the front desk with him. “She’s like a grandmother to me; everybody loves Mrs. Jones,” said Jose, who graduated from Berkley College graduate with a bachelor’s in business and technology and hopes to own his own business some day. Meanwhile, racking up holiday pay helps Jose support his three young children. 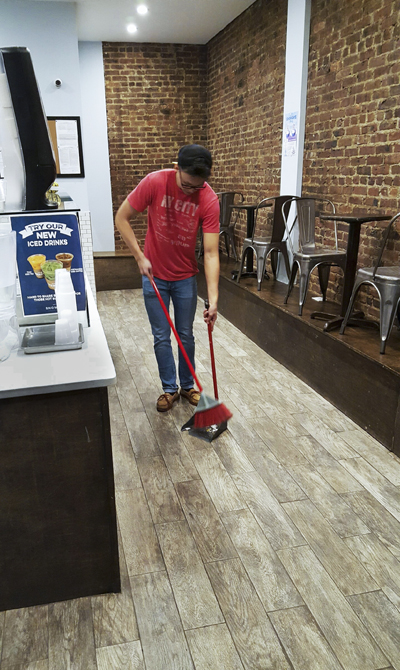 Black Friday started off slowly at a small ice cream shop in Forest Hills called Snowdays, as most shoppers were at malls until early evening. With free time, Pavel Li, a student at Stony Brook University, opened a book to study for a midterm. Then, at 5 p.m., a barrage of exhausted shoppers lined up, and Li shut his book, took a gulp of coffee and took up his station at the cash register.

By 11:30 p.m., his hands were sticky, and Li took his first break since 5 p.m., and sighed; garbage tossing and mopping are among the least favorite parts of his job. The worst is getting out late. “Once it hits midnight and I’m still here, a part of me just wants to quit,” said Li, 22, who then walks home, 30 minutes away, to save money.

Starting work at 1 p.m. and ending around midnight, Li said he was paid slightly above minimum wage and got overtime for working on Black Friday, while his mom and sister visit relatives in Moscow, Russia.

“It’s hectic juggling school, certification licensing and work,” said Li, who hopes to work as an emergency medical technician. “But I need all of them…It’s frustrating sometimes because in order to become a physician or doctor, there are so many little steps and academic requirements and I need money at the same time.”

Viviana Reyes walked through the door of Michael Kors in the Queens Center Mall in Elmhurst on Thanksgiving at 5 p.m., a tall cup of Starbucks in her hand, ready to start her 13-hour Black Friday shift. An assistant store manager, Reyes, 21, is a passionate stylist and leader at the luxury brand retailer. “I work an overnight shift every year on Black Friday,” Reyes said. “Black Friday always reminds me of the Super Bowl. My team prepares for it weeks and even months in advance.”

Reyes has worked retail since she was 16 and this is her fifth year working Black Friday. A full-time student at Queens College and a full-time manager, she barely has time to enjoy dinner with her family – any day. On Thanksgiving, her family has an early dinner so Reyes and her younger sister Catherine can leave for work at 4 p.m.

The mall doors opened at 5 p.m. — but not at Michael Kors. “Our entire network crashed so we aren’t able to get our registers running and ring up our customers,” said Reyes. She called the company’s help desk and it took an hour and a half to get everything back up and running. Frustrated shoppers peered through the glass doors, and Reyes said she kept thinking about how much money the store was missing losing.

Clothes are scattered throughout the store at UNIQLO on West 34th Street in midtown Manhattan, as fitting room and checkout lines wrap around the outer perimeter. Black Friday brings in the crowds of people seeking the famous “heat-technology” clothing UNIQLO is known for. Amid the chaos, Shanece Grey enthusiastically helps customers navigate through the store.

“At UNIQLO, Black Friday is known as a blackout day – you cannot call out, request a change in your shift, or start at a different time than the one you’re scheduled for,” said Grey, 23, who works about 24 hours a week and is a full-time student at Baruch College.

Born in Jamaica, Grey moved to the Bronx in 2002, then to Eastchester, in Westchester County, with her mom. “To me, Thanksgiving is all about family, but I don’t really celebrate it because I have personal issues with my relatives,” she said.

“From the stories I’ve heard of past Black Friday workers, I actually expect to work more than 10 hours, which will be a first for me,” she said. But working on Black Friday, she is paid $15 an hour, rather than the usual $12.50, and receives free food at the end of the day. Her duties range from helping customers find an item, to checking out at the register, and everything in between. “If there is a spill on the floor, I have to clean that up too,” she said. 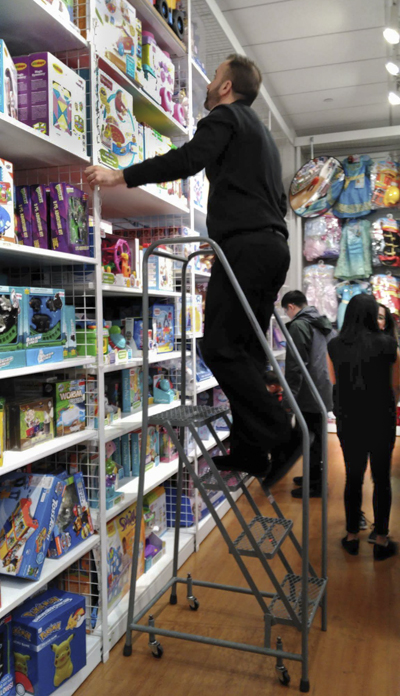 Michael Fleet, a seasonal employee in the housewares department at Century 21 Department Stores in Rego Park, Queens, said he was happy to work on Thanksgiving. “I’m here to make extra money so I was happy that they had asked me,” said Fleet, 40, who said he would make time and a half for working on the holiday.

“My girlfriend is working until 2 at her job; it wasn’t like I was missing out on the family get-together ’cause we’ll meet up and then we’ll go together,” he said. Since most of Fleet’s family lives in Seattle, he has spent his Thanksgivings with his girlfriend and her family for the last eight years. Fleet says. “I enjoy spending time with her family. You get together, have a big dinner. And it’s different because they don’t do a traditional Thanksgiving. She is from the Dominican Republic so no turkey, no mashed potatoes, no gravy.” 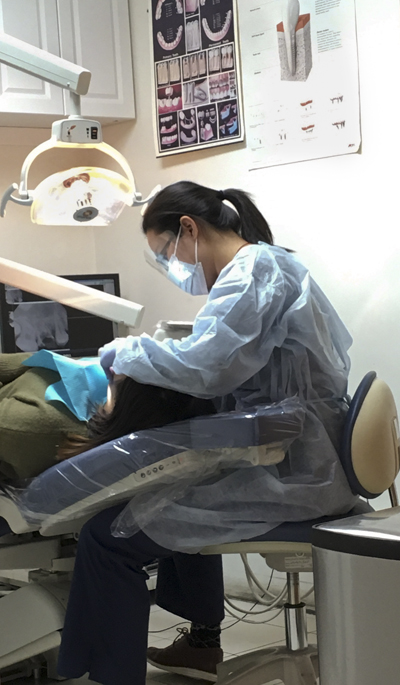 Christie Chen works as a dentist seven days a week, four days at her own practice in Manhattan and three days at TruSmile Dental, in Flushing, because she’s eager to pay off her thousands of dollars of debt from dental school. So Black Friday is another day at the office.

The schedule at TruSmile was busier than usual, and she started at 8:45 a.m., trying to gobble down a breakfast before taking on the patients at 9 a.m. “There are so many emergency exams, it’s crazy,” said Chen. “People must have ate so much on Thanksgiving that their tooth chipped.”

Many elderly patients and parents with children were sitting in the waiting room when the front door opened and an elderly man walked up to the reception desk.

“Wǒ yáchǐ hěn tòng,” he exclaimed in pain, pointing to his mouth. A receptionist asked him in Chinese, “Have you been here before?” No.

She told him the same thing she had told the other walk-ins: “There are many patients here with an appointment. Since you didn’t make one, you’ll have to wait a bit. Is that fine?”

“I don’t have a regular lunch schedule,” she said. “I have lunch when I don’t have patients or when they’re in the bathroom.”

When she started this job about two years ago, she was very animated. Now, she can’t wait to go home and rest. “This job makes you go mad.”