A Game of Chance for Broadway Tickets

Article and multimedia by Ruth Ostrow

Brianna Liang, a 21-year-old college student, tried to keep her teeth from chattering in the 30-degree weather as she waited outside the Eugene O’Neill Theatre. She was one of approximately 50 people who were hoping to win discounted tickets via lottery to that evening’s performance of “Book of Mormon.”

“As someone who couldn’t afford to buy tickets in general if there weren’t any rush or lottery policies, I think it’s good because it gives people the opportunity to actively seek out shows,” said Liang. “Now there’s a wider range of people who can come.”

Although policies vary between shows, all lotteries give people who can’t handle the big price tag on seats the chance to experience a Broadway theater performance, making productions more accessible to a more diverse audience.

Winning a ticket is as simple as showing up at the theater and getting lucky. Would-be theatergoers typically arrive outside two hours before curtain. After writing their names on slips, they wait for a select few to be called. Winners can claim one or two tickets at a steep discount. “Book of Mormon,” for example, offers $32 tickets to in-person lottery winners; at the box office seats can as much as $477.

Lotteries received a recent surge in popularity with the arrival of “Hamilton” on Broadway. As many as 600 eager fans would gather outside the Richard Rodgers Theatre to participate in a “Ham4Ham,” named because winners get the chance to see “Hamilton” for the price of “a Hamilton” – a $10 bill. Not only did the lottery offer an elusive ticket to a perpetually sold-out show, but the price was an enormous discount; a premium orchestra seat sells for $849. 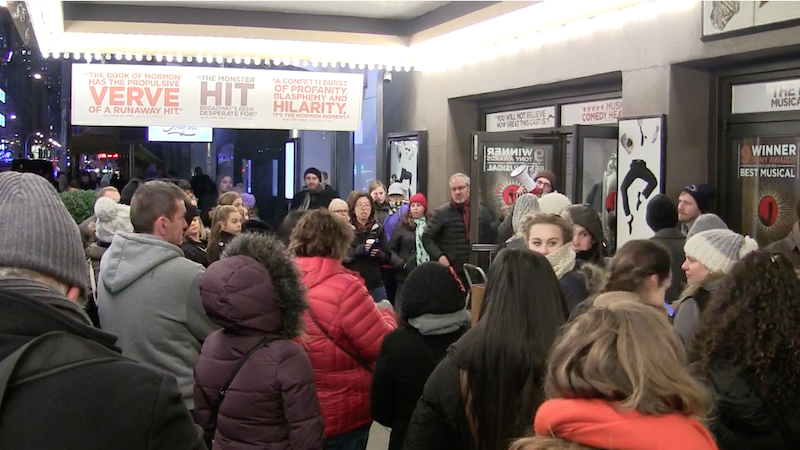 According to Debra Caplan, a theater professor at Baruch College, the sharp increase in ticket prices over time led to a higher demand for cheaper alternatives.

Composer and original lead actor Lin-Manuel Miranda generated excitement for the “Hamilton” lotteries by creating small performances outside the theater for applicants. Members of the cast as well as those from neighboring Broadway venues would sing, rap and dance. The spontaneous “shows” would circulate on the Internet.

Fans return time and time again for a lottery chance to see “Hamilton.”

“I’ve tried 30 times, and that’s an accurate number because I’ve actually counted,” said Liang. “I’ve tried since off-Broadway! Most of them were in person, and when the digital lotteries started, I did that as well.”

On Jan. 5, 2016, “Hamilton” moved its lottery online, and since then, digital lotteries have become increasingly more popular.

Zeynep Akca, 21, a college student and aspiring actress, explained the digital lottery system in its simplest form: “You go online, you click the enter button, you enter your information. When the lottery closes, you get an email. It usually says, ‘Try again.’”

Caplan observed, “The Internet has become sort of a depositor for people to learn about what exactly you need to do to get in the lottery. Pre-Internet, it wouldn’t be quite so easy to get that information to people unless they physically showed up or called the theater.”

Where live lotteries do better is the way they foster a sense of community among those in line.

“During the last “Wicked” lottery I went to, there was a very nice lady in line with me,” said Akca. And she was visiting with their family. We just bonded over liking theater and her son being 26 and seeing “Wicked” just like he did 10 years before that on his 16th birthday.” The family was particularly lucky as several members of the group managed to have their names drawn.

Participating shows use the lotteries as a clever way of drawing audiences to otherwise unappealing seats. Many discounted tickets are for seats with partial or obscured view of the stage. Others are for the seats very close to the stage that leaves spectators craning their necks in order to see the action.

Nevertheless, Liang felt that the seats are worth it.

“They were never so bad that they took away from the experience,” she said of sightlines from past lottery seats. “I’ve never gone to a show and had a bad time. In all honesty, a foot in the theater is good enough for me.”

The timing of lotteries – just before curtain — ensures that the discounted seats offered are ones that might have otherwise gone unsold.

“There’s sometimes a kind of economic calculus at work,” explained Caplan. “If you have a show that maybe isn’t doing so well, you can offer more lottery tickets so that people are still coming, filling the seats and hopefully spreading the show through word of mouth.”