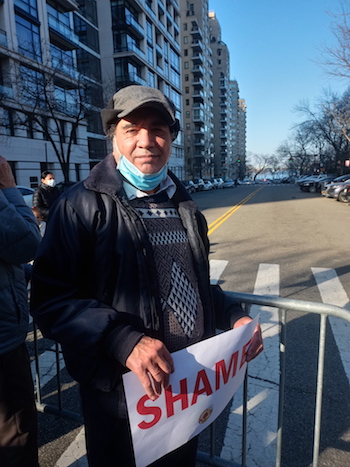 Dalip Singh held a sign outside of Gracie Mansion, the official residence of the mayor of New York City. The sign spelled out “shame” in capital, red letters.

Singh has driven a yellow cab for the last 33 years of his life. He has always been a survivor, but things are now worse than ever. He is in serious debt and has filed for bankruptcy. The institution to which he owes more than $500,000 is coming after his house in Queens. “There is no support from the government,” said Singh.

New York City’s yellow cab drivers have protested at Gracie Mansion, Albany and City Hall for 25 days. The protests began the morning of March 9, after Mayor de Blasio announced a relief fund that many see as a slap in the face.

Amid the many crises the industry is facing —  medallion loans debt, new ride-hailing services taking over the market and a mental health epidemic — drivers demand the city’s attention and help in restituting what once was a reliable business. 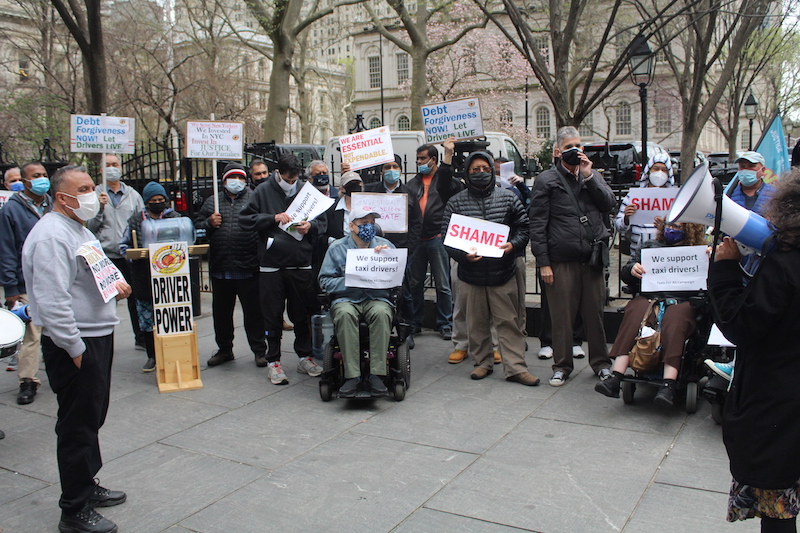 A taxi medallion is the permit given by New York City that allows taxicabs to offer their ride-hailing services to passengers. Half a million dollars is the average debt for these permit holders. The profession used to be a fairly reliable source of income. Today, yellow cab drivers are one of the unions struggling the most.

The price for a taxi medallion reached $1.3 million in 2014, before it plummeted. It then went as low as $130,000. An investigation by the Office of the New York Attorney General found that the Taxi and Limousine Commission was responsible for conducting auctions between 2004 to 2017 that led to an artificial inflation of medallion prices. This misled some taxi drivers to believe purchasing a medallion would be profitable. Attorney General Letitia James has since filed a notice of claim for $810 million to the city. 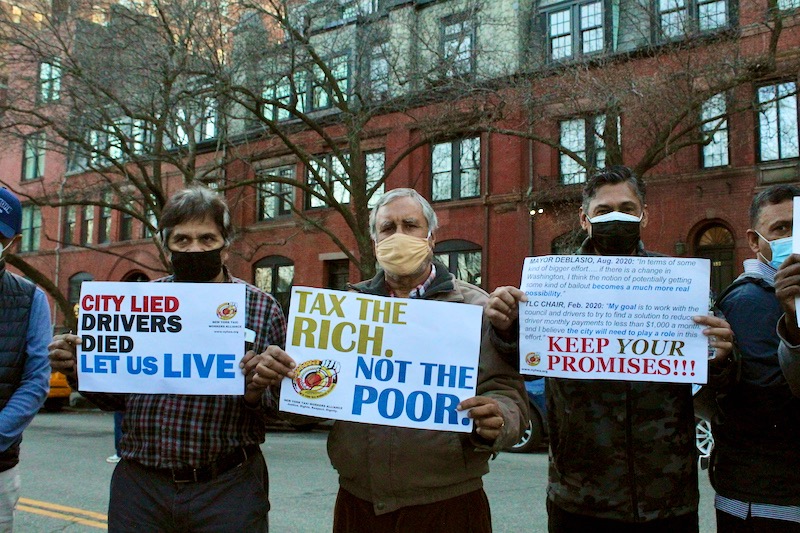 “Government should be a source of justice, not a vehicle for fraudulent practices,” James said in a statement. On April 6, taxi drivers filed a class action against the TLC, asking for $2.5 billion in restitution.

The TLC has avoided accountability by working through brokers and putting out broker enforcement guidelines in February 2020. In their last annual report, they claimed to have helped only 450 medallion owners out of the 13,587 in the city, through their virtual Drivers Resource Center.

According to the TLC’s data hub, business for yellow cab drivers had gone down 97 percent between April 2019 and April 2020 as a result of the pandemic. In response to this, the TLC and partner agencies ran the GetFoodNYC program from March 2020 to October 2020, where 10,000 drivers earned about $40 million delivering food to New Yorkers who could not leave their homes. However, by the end of the program in October, the average total earning per driver was just $353. 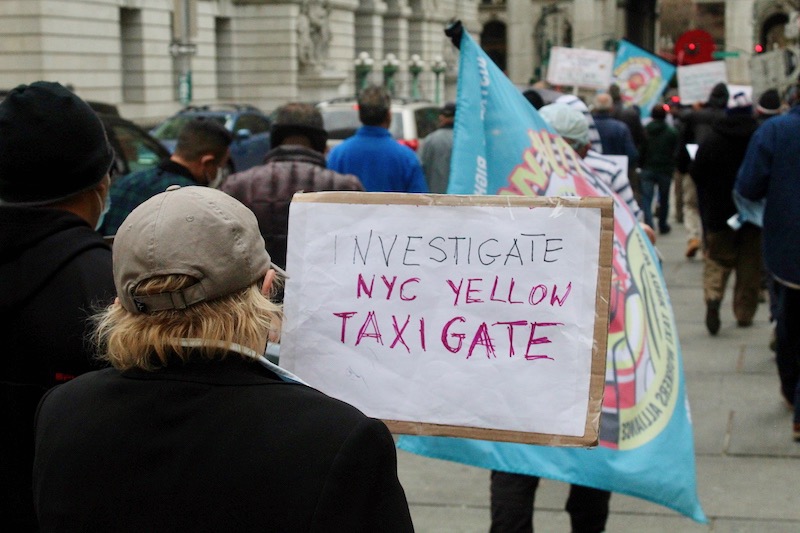 Many medallion owners feel they are stuck in a business that is no longer reliable.

Hossain, like many of his colleagues, took out a loan to pay for his medallion. He has a monthly payment of $3,000 for his permit. In total, his monthly costs add up to $5,000 with insurance payments. He admits things have been difficult for a long time but believes the rise of unregulated ride hailing services has also contributed to the problem.

“Nothing is going to help us, nothing,” said Hossain, who attended the rally at Gracie Mansion, leaning on his taxi and observing from a distance.

The demonstrations have been gathering steam in response to a worsening crisis that has even cost the lives of taxi drivers. At least seven taxi drivers died by suicide in 2018 due to financial distress, one of them by shooting himself in front of City Hall. 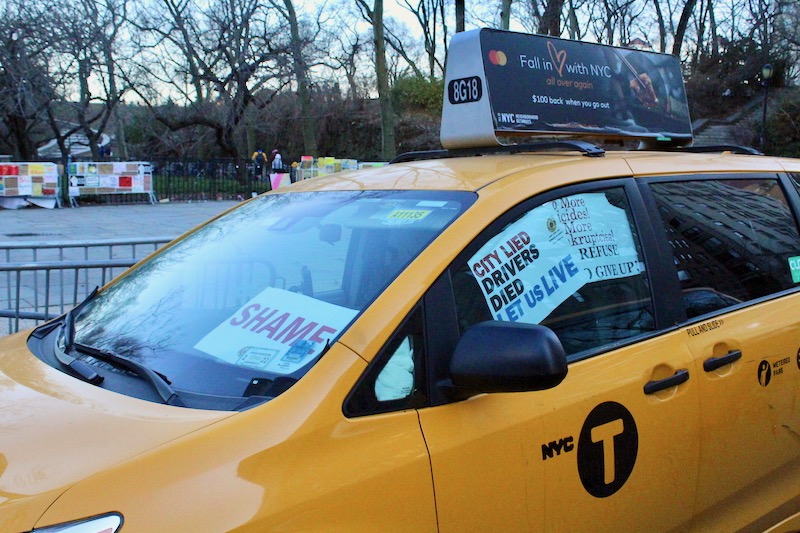 At the time, the TLC also waived $20 million of fees in response to the suicides, but no conclusive solution or legislation was drafted.  On the ninth consecutive day of the most recent round of protests, drivers held prayers for their colleagues lost to suicide.

Last year, on November 20, taxi drivers and their allies closed down the Brooklyn Bridge demanding debt forgiveness. On March 5 this year, they returned to the Bridge to protest again.

The decision to gather specifically at the mayor’s mansion came after Mayor Bill de Blasio briefed his Taxi Medallion Owner-Driver Relief Fund on the morning of March 9. The fund would allow medallion owners to take out no-interest loans of $20,000 to make down payments, and low or no-interest loans of $9,000 from the city to pay monthly expenses.

Victor Salazar, a medallion driver, explained to a fellow driver what they were protesting outside of Gracie Mansion and City Hall. “He said the best he could do is give us a loan; it’s the same thing that Marblegate did,” he said, referring to de Blasio’s fund. 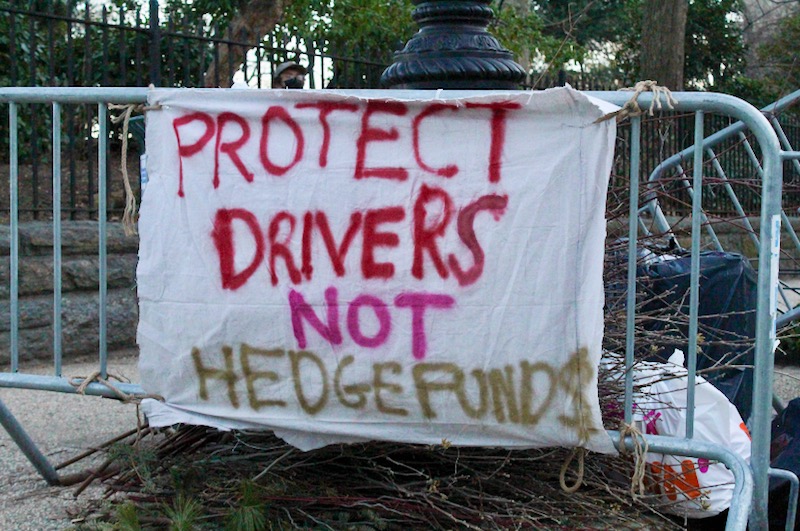 Critics of de Blasio’s plan say it mainly benefits hedge funds like Marblegate. Medallion owners would have to negotiate separately with lenders what they will do with the loans given by the city, leaving yellow cab drivers, who for the most part are immigrants and minorities, in a position of vulnerability.

Bhairavi Desai, executive director of the New York Taxi Working Alliance, argues de Blasio’s fund will only put drivers in further debt, forcing them to pay loans on top of the ones they already have. 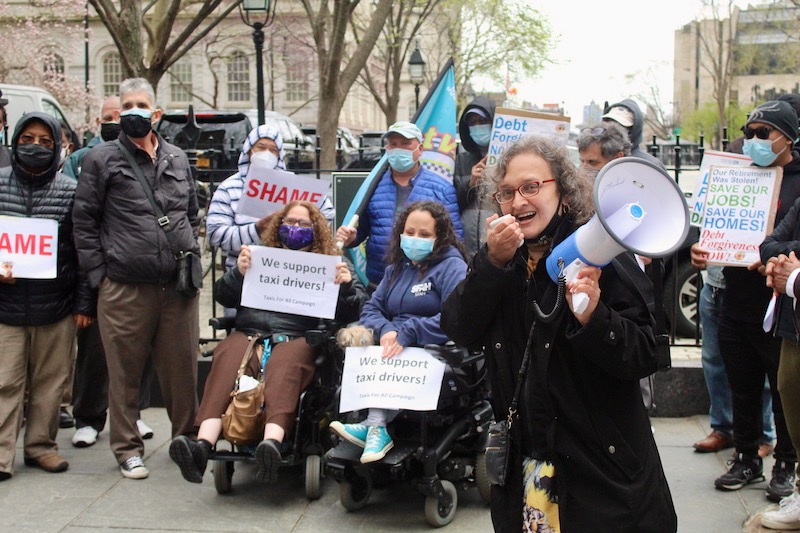 “All this fund does is actually deepen the crisis,” said Desai, who also co-founded the New York Taxi Workers Alliance in 1998 and has been unionizing cab drivers since 1996.

Gabriel Strachota, organizer for the NYTWA, agrees with Desai. “It’s an insult,” he said.

“Frankly, it is an insult to drivers who have served the city for decades and have had their retirement stolen. The brother of one of our members here with us today committed suicide by jumping into the East River, right here, in front of the mayor’s house,” Strachota said.

The NYTWA has drafted an alternative proposal that has been endorsed by City Comptroller Scott M. Stringer and Attorney General Letitia James. The plan would cost the city $75 million, $15 million more than de Blasio’s fund. 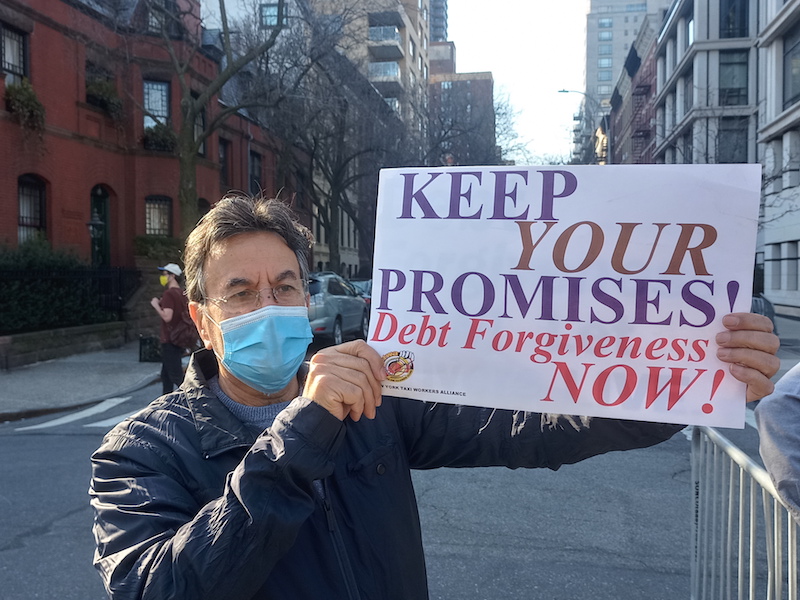 It pardons a portion of the drivers’ debt, leaving it at a maximum of $125,000, and includes a monthly mortgage of up to $750 a month. The mayor has not commented publicly on the proposal. Senator Jessica Ramos (D- NY) created a bill that embodies the NYTWA’s proposal for debt restructuring. While the city showed support to Senator Ramos’ bill at a public hearing, drivers demanded further action after de Blasio’s limited relief fund.

On April 9, the 24th consecutive day of gatherings, drivers kept chanting. They say they’ll keep protesting until they have a response from the city.

“Talk to the union! We want answers!’’ 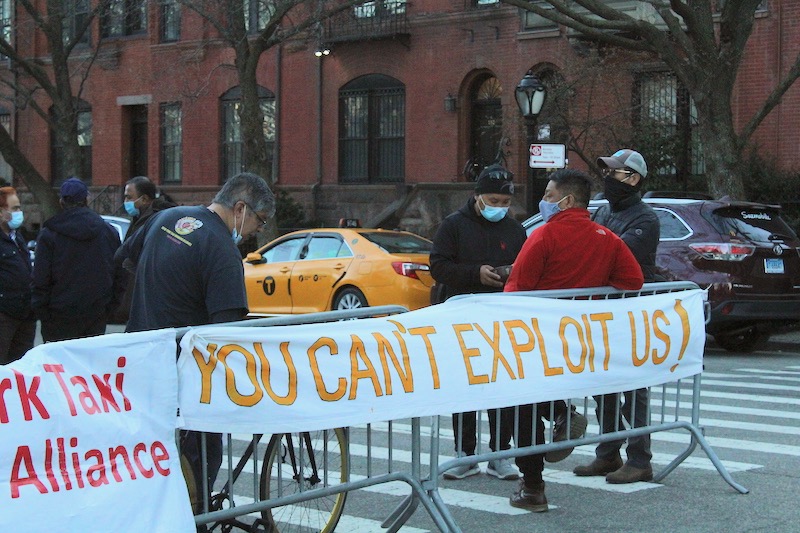 Some drivers, like Jean Rene Tannis, are closer to despair than optimism, but keep showing up.

“I’m 72. I’ll keep working until I die, I will never finish paying that bill,” said Tannis.

Desai calls for any public official to spread the message, to come stand with them.

“State senator Jessica Ramos has a proposal that would essentially set up a backstop. We call for support for it,’’ Desai said. “We are calling for Senator Schumer, who is the one to bring the money to the city, to intervene and let the mayor know that money is supposed to be used to help the people survive, not to give it away to lenders.”

As of April 13, the mayor has not reacted to the protests. His office did not respond to a request for comment.