First off, I’d like to say that I thoroughly enjoyed watching Devil in a Blue Dress. Every Denzel Washington movie I’ve ever watched has never disappointed me. Don Cheadle as Mouse was also very good; he was actually only nominated for his supporting role by the Screen Actors Guild but never won like someone had mentioned in class.

The film is set during the same period that traditional film noirs were set in; it’s after WWII and in a big city, Los Angeles. Easy Rawlins is just trying to make ends meet after being fired from his job. Easy is in need of financial security; agreeing to work for Albright is easy money but it puts him in a whole world of trouble. Much like the protagonists in other film noirs we’ve watched, Easy takes it one day at a time and doesn’t look too much into the future because there’s always a chance that he might not have one. Just like Borde and Chaumeton said in one of our readings, “the presence of crime…gives film noir its most distinctive stamp.”

I noticed a few things about the film that I suppose pay homage to noir films of the 40’s and 50’s.  Easy began to go down the road to becoming a morally ambiguous protagonist, much like the male protagonists of 40’s and 50’s film noir, once he took the job from Albright. There were also uses of flashbacks several times in the movie. I also felt that the character that kept trying to cut down the trees in the neighborhood was similar to the hotel caretaker in Touch of Evil; they were both borderline crazy and provided instances of comedic relief.

In the Schrader reading, one of the elements of film noir that are common is the attachment to water. In this one scene in Devil in a Blue Dress, Easy is supposed to meet Albright at the pier to do business. According to Schrader, “docks and piers are second only to alleyways as the most popular rendezvous points” (220). 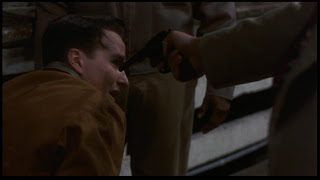 Another thing I noticed about the film was Daphne as the femme fatale. Daphne is mysterious when she is first described; she hangs out in black clubs and hasn’t been seen by her mayoral candidate boyfriend, Carter, in a while. The first time we see Daphne, she stands out; she’s very beautiful and is also very seductive. In one scene between Easy and Daphne, Easy asks what Daphne’s weapon of choice is and she responds with: “why don’t you search me and find out?”  Daphne is intended to be looked at throughout the whole film. Her wearing of blue dresses throughout the whole film makes her stand out amongst her dullish surroundings.

By the end of the movie, I was glad that Daphne and Easy didn’t die. Happy endings aren’t all too common in noir films. Devil in a Blue Dress isn’t your typical noir film, but noir none the less. I did like how Easy started to get used to being a private investigator and how he was going to start his own business; it’s a shame that the rest of his stories were not put into film.

3 thoughts on “Devil in a Blue Dress & Neo-Noir”