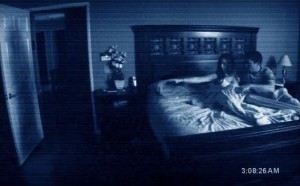 While watching the movie paranormal activity for the second time I began to wonder why this film had as much success as it did. Watching the film the first time I felt that it was extremely boring and nothing really happened until the last half hour of the film. The second time around the film was seemed even less eventful. Despite its lack of action and fear evoking scenes, the film had a gross revenue of $192,735,402, not bad for a film made on a $15000 budget, and only released in select theaters. Its hard to believe that a film such as that could be such a hit while a film like the collector, which in my opinion was a far better horror movie, also released in select theaters and had a budget of $3,000,000, only grossed $7,712,114. Although some of Paranormal Activities success can be attributed to it being marketed as the scariest movie ever made, i believe peoples natural attraction to the unknown also plays a big role. Ghosts, spirits, demons and other types of paranormal activity have always been of interest to humans. This fascination can be seen even in children who will say things such as “maybe the ghost took it” or “the ghost did it”. What i thought really demonstrated the extent to which people not only are drawn to but believe in paranormal activity was when i saw this clip shown on CNN in which a transparent figure is seen walking across the room of Michael Jacksons mansion shortly after his death. This clip drew alot of controversy in the United Stated, many people actually believing that they had seen the ghost of Michael Jackson haunting the neverland ranch. It was later explained that the image was created by the shadow of a passing crew worker, but to calm the nerves of Americans CNN had to air a new broadcast explaining what had actually happened. I was surprised to see the amount of attention that this video had received because ghosts are something that i personally do not really believe in, and if they do exist am almost positive they would not be able to be caught on camera. After seeing the attention that this clip brought getting over 3 million views on youtube, the success of the film paranormal activity 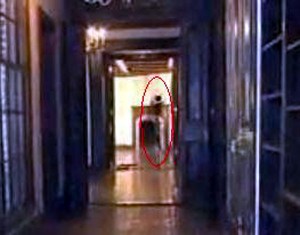 While viewing the clip shown in class this week dealing with how to spot a communist I was reminded of a family guy clip that I had seen before. This Family Guy clip is very similar to the one shown in class but substitutes communism for homosexuality, showing the viewer how to spot a gay. Knowing that Family Guy spoofs usually have some relevance to real life events I decided to do some research on this and found out that there was a Lavender Scare occurring at the same time as the Red Scare, both being effects of the Cold war. The Lavender Scare refers to the persecution of homosexuals in the 1950’s, and gained its popularity through the association of homosexuality with communism. Around this time homosexuality was seen as a mental illness and because they had this “mental illness” gays and lesbians were seen as being susceptible to blackmail. McCarthy, who was very prominent in the Red Scare was also prominent in the Lavender scare. He and many others believed that because of their susceptibility to black mail homosexuals would be easy prey for communists and those in the federal government would be forced to give them secret information on the U.S. government. Just as with the Red Scare, the Lavender scare resulted in various accusations, investigations, and firings within the Federal government. Many Americans terrified of communism were easily convinced to back the Lavender scare, and some even began to view homosexuals as a bigger threat to national security then communists themselves. Today; however, many people claim that there were other reasons as to why the Lavender Scare was started other then Communism. One being that the number of Homosexuals in America was on a rise and Lavender Scare was used to put an end to this and preserve Americas masculinity. Others believe it was used by the republican party as a way to take down Harry S. Trumans administration by exposing it as not only communist but homosexual. Like the last post on pornography this shows another example of politicians taking advantage of peoples fearss to push their agendas. I had previously not heard of the lavander scare and i think this Family guy clip was a great way of bringing attention this event which people do not tend to talk about.
[kml_flashembed movie="http://www.youtube.com/v/ffm_TERH2_o" width="425" height="350" wmode="transparent" /]
[kml_flashembed movie="http://www.youtube.com/v/43Vq6j9z8JI" width="425" height="350" wmode="transparent" /]

Throughout Americas history there has always been a fear of sex which can be clearly seen in the film industry. Sex, more so in the past, was a topic in which a person does not 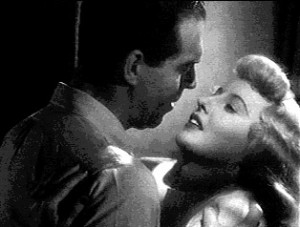 speak of, a subject that was taboo in any social setting. It was thought of as a topic that would corrupt society and therefore limitations were placed on what film producers could and couldn’t do when depicting relationships. Married couples were often shown sleeping on different beds, and any implications of sex were considered scandalous. Scenes such as that in Double Indemnity where Phyllis come out covered only in a blanket, or the scene ended shortly after a kiss which leave the rest to the audiences imagination were seen as pushing the limit. In the film noir films we have viewed in class anybody having a relationship with a woman can almost certainly be expected to die. This holds true whether the women is a femme fatal as Phyllis in Double Indemnity, Gilda in Gilda, and Elsa from Lady from shanghai or a wholesome woman such as Polly from D.O.A. Men who fall for these women all end up dead or in a non idealistic situation. I believe that by doing this the intended message to the audience is that women and relationships will lead to your downfall. Movies such as these are meant to promote purity, because of the fear that sex will corrupt the minds of society. Although the portrayal of sex in films has come a long way from the film noir period the fear of sex and portrayal of sex as negative is still visible today. Modern films will show acts of sex but they do so in a way that still carries on the message th 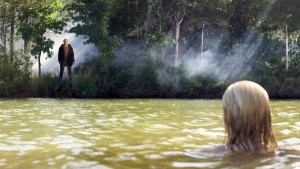 at sex and relationships will lead to your down fall. In most horror films those shown having sex will die shortly after, the typical lone survivor will be the virgin of the group. A perfect example of this would be Friday the 13th (2009) where basically everyone dies in aright before, during, or after committing a sexual act. This theme of the virgin surviving exposes Americas still existent fear of sex. Although I do not have a problem with the production of films today I find it interesting how America projects sex in films as negative but allow other things which may have a greater impact on society such as crime and violence. I believe violence in movies is something that also has a great chance of corrupting the minds I would say even greater then sex and find it interesting that America has never made as big a deal about it.