While I did run into some expected issues trying to get Github Pages to work properly without using the terminal, I would encourage those of you that do want to focus on building a website as a major part of your final to check out the following websites:

This is a hard process for me to properly demonstrate in class, as my computer is associated with a github account that is already using the Github Pages functionality.  That said, I am more than happy to set up office hours for anyone that is having trouble and would like to get their site properly published via Github Pages.

For those of you interested in a more basic rundown of version control with git and GitHub, please see this excellent resource in the Chronicle of Higher Education:

For your homework (DUE Tuesday: 9/29), please login to Vocat and watch the film Downloaded (CLICK HERE TO ACCESS FULL FILM).  I believe if you want to view the film without commercials it is available on Netflix (at least it was at one time).  If you’ve seen the film, and would like to watch Winters’ follow up film ‘Deep Web,’ it is available for purchase, and you can do the following assignment based on that film instead. 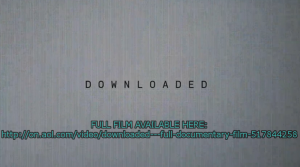 Find 3 sources that back up your view, and write a sentence that requires citation.  Please format your sources/sentences as I have in the example below:

In Dr. Dave Carter and Ian Rogers’ “Fifteen years of ‘Utopia’:Napster and Pitchfork as technologies of democratization” the claim is made that industry hierarchies that resulted from disruption caused by services like Napster and Pitchfork carry on to this day (Carter).

* Carter, David, and Ian Rogers. “Fifteen years of ‘Utopia’: Napster and Pitchfork as technologies of democratization.” First Monday 19, no. 10 (2014).

The purpose of this is to prepare for the Midterm Proposal, which is tentatively due October 22nd.  I want to make sure everyone is clear on properly citing sources, which I will not be SUPER strict on format, but WILL be super strict on the citation attempts.  Plagiarism will not be tolerated on midterm submissions.

Friday’s class is optional, however those that come will be excused from either a previous or future absence.  The class will focus on Github, Github Pages, Ruby on Rails, and Ruby Middleman.  The session will be more technically challenging than other technical tutorial class sessions.  Those of you that have mastered HTML and CSS prior to this class are encouraged to attend.

Today in class we are talking about sizing images and putting them into an HTML file.
As I’ve said before, this is not an HTML course, however I feel that there is more benefit in using a text editor in the context of this course / in today’s world than there is a word processor.  Today I will also be introducing “Markdown”, another form of markup that easily parses to HTML.
In the coming weeks there will not be a TON of concentration on HTML or CSS (which we will be discussing a little later), but when exploring more robust tools like GIMP and Blender (and perhaps Unity), you will have a much cleaner way of presenting your research.  Text editors also tend to use less of your computing resources than word processors.
1. I will be attempting to livestream today’s class, and will place a link here once the stream is archived.
2. I’ve created a basic .html site that highlights the methods used for image sizing here: https://syllabus-fall15.herokuapp.com/sample.html
3.  Remember, for the homework due on Tuesday, you must log into Vocat, and follow the instructions below.  Remember that your Vocat credentials are the same credentials you use to login to on-campus Wi-Fi.

HW ASSIGNMENT AS IT SHOWS UP IN VOCAT:

Once you have read Manovich’s What is New Media? Eight Propositions, I would like you to compose a response to one of the New Media propositions. Which one do you think is most interesting? Most relevant? Do you believe anything he has expressed is problematic? I encourage correct spelling and grammar. Citations from external sources are also welcome. This response doesn’t need to be long, 200 words should suffice. Please follow the instructions below for proper submission of this assignment:

This is due on Tuesday, Sep. 8th

Welcome to class!  This is the course blog, which we will use to host online discussions, assigned media like films/documentaries, and essential resources for success in this course.

You can access the syllabus HERE.  It is subject to change during the first couple weeks.