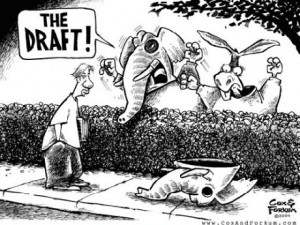 1. What were penalties for the men who refused to respond to the draft?

2. Since even the wealthy were mandated to participate in the draft and weren’t allowed to buy their way out, were they treated any differently then the poor with what duties were assigned?

This entry was posted in October 12 Assignment, TV24 and tagged draft, selective service act, World War I. Bookmark the permalink.