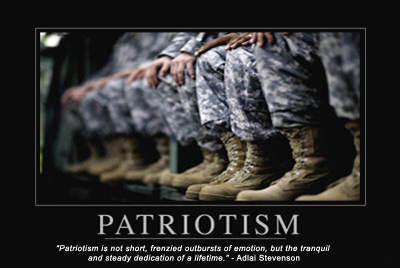 At the time of WW1 people across the globe were unquestionably more patriotic than they are today. They identified very strongly with their own country. A historical act of true patriotism was when Patrick Henry proclaimed his timeless cry “Give me liberty or give me death.” Henry was a true American patriot who faced losing freedom in his beloved America, while it fought against England’s rule in this new land. America was the hope for freedom and without reservation or fear Patrick Henry would rather be put to death then not live free in his beloved America.

This entry was posted in October 12 Assignment, TV24 and tagged Patriotism. Bookmark the permalink.

One Response to Patriotism