In order to support Greece and Turkey with economic and military aid to prevent them from falling into the Soviet sphere, the Truman Doctrine was set forth by the United States President Harry S. Truman on March 12, 1947. Believing that the “totalitarian regimes” represented a threat to international peace and also the national security of the Unites States, he stated in the doctrine that it would be “the policy of the United States to support free peoples who are resisting attempted subjugation by armed minorities or by outside pressures.”

President Harry S. Truman presented this address before a joint session of Congress. He asked Congress for $400 million in military and economic assistance for Turkey and Greece so that they could both defeat their domestic enemies. The Eric Foner book explains that Truman’s rhetoric suggested the Unites States had assumed a permanent global responsibility. The doctrine aimed to end the communist threat, and in 1952 both the countries joined NATO which was a military alliance that guaranteed their protection.

If this particular historical event had not taken place, Greece and Turkey could have fallen to communism with serious consequences. Communism could have spread to major portions of the world and finally crawled its way up into the United States. This doctrine not only brought nation-building activities and modernization programs to the forefronts of foreign policy but also proved that it was possible to mobilize American economic power to stabilize and modernize unstable regions without direct military intervention. Turkey could have lost control of the Dardanelles and Greece could not have defeated the KKE. Historians often also use this event to mark the starting date of the Cold War. Therefore it is possible that had the Truman doctrine not been put to effect, the cold war could have had a comparatively smaller magnitude and impact. 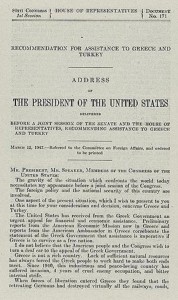