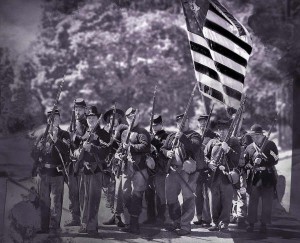 Every so often, a piece of information comes along that, for whatever reason, triggers my interest in a manner just slightly different than the rest of the nonsense that floats by my mind day in and day out. From the looks of it, Eric Foner’s review of David Blight’s “Race and Reunion” very well just may be one of those sparks (whether or not Foner is just that good of a writer… well, that we’ll just have to wait and find out).

I’d never given much thought to the idea that history is so dependent on the memory of whoever writes it, or the extent to which it can be ‘manipulated’ by any particular bais – that, even what we’ve always regarded as fact can also have 2 (or more) sides to the story. What I found to be the clearest example of this was when Foner writes of the “Ironies”, that, “Abounded in the triumph of the reconciliationist outlook.” Particularly that, “Even Memorial Day, which had begun in 1865 when thousands of black South Carolinians laid flowers on the graves of Union soldiers, soon became an occasion for expressions of white nationalism and reconciliation.”

As far as I can see from this review, Blight seems to portray quite strongly the idea that History really is only as true as the memory of those who win the battle of having their side of the story brought to, believed, and accepted by the masses; and that may just be what it was about this review that seemed to spark my interest.