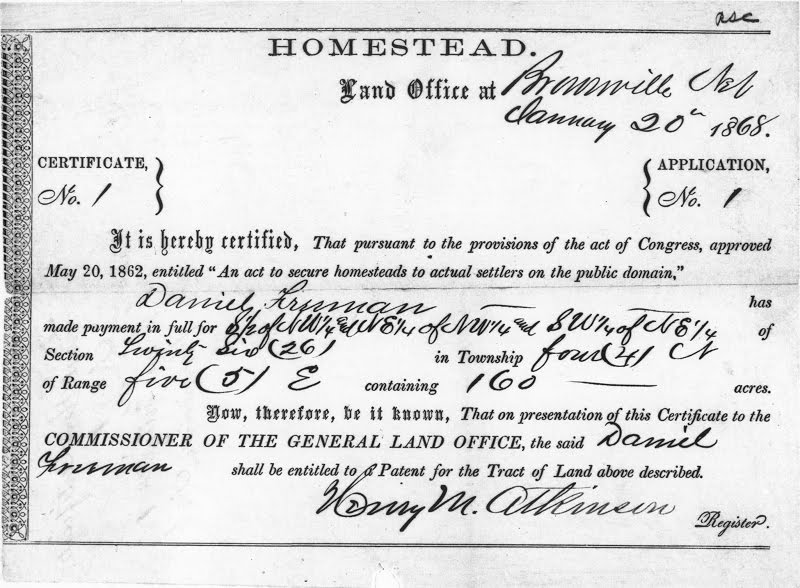 Back in May 1862, President Abraham Lincoln passed the first law that granted land to most people, the Homestead Act. The Homestead Act entitled immigrants, freed slaves and Americans to 160 acres of undeveloped land to increase the expansion to the west. In order to gain access to 160 acres of federal land, Settlers had to follow three steps. Those interested in the new law needed to file an application in order to obtain a homestead title. Next, applicants needed to improve and cultivate the land. Although the first two steps seemed fairly easy to fulfill, there was one other requirement. All applicants needed to remain on the granted land for a minimum of five years in order to file for a deed of title which completed step 3.

Despite the promise of the Homestead Act, many applicants were unable to seize the opportunity the new law offered. Only about 40% of applicants who started the process were able to obtain titles to their homestead land. That 40% amounted to 270,000,000 acres of land which equaled 10% of all the land in the United States.

The Homestead Act was also greatly abused as many individuals committed fraud. Instead of building farms and using the land for agriculture, owners used the land to gain access to water and other minerals. A few owners used the land to gather timber and oil. Eventually the Homestead Act was discontinued in 1976 when the government decided to take control of public land and passed the Federal Land Policy and Management Act.

2 thoughts on “Free Land For Everyone!”