How easy it for a President to avoid war? Under the circumstances the world was in during the years prior to World War one, not easy. However, wartime President, Woodrow Wilson, did whatever he could to refrain from war for two whole years. His eventual decision to go to war in 1912, was only to be the world a “safe place for a democracy.” Most people would agree that Wilson was a pacifist in nature and did whatever he could to create a peaceful situation both at home and abroad. His attempts finally established the fourteen points, which served as a peace settlement. The text does not provide the terms and explain the language of these fourteen points in as much debt or clarity as I would like. In fact, this attempt on behalf of the U.S. to stress the reason of war and post-war planning should be understood in more depth with a better analysis, which was perhaps lacking from the side of Foner. It is important to understand that the fourteen points confirmed that the war was being fought for a reason, a moral one. These fourteen points pushed for the freedom of the seas, negotiations between territories and nations, redrawn borders and probably most important, the formation of the League of Nations. 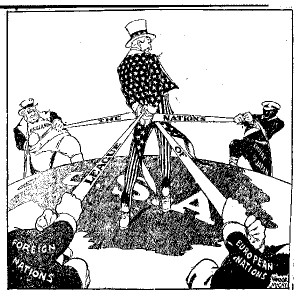