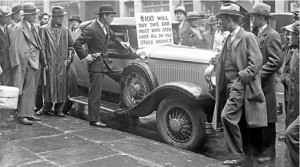 I think this picture pretty much speaks for itself - an image we came a little bit too close to in the past couple of years...

I’m posting here a very famous picture from The Wall Street Journal of what looks like a stock broker or investor who lost it all the day after the crash of October 29, 1929. This picture, to me, represents a hard fall very similar to the one that many of us felt just a few short years ago with the failure and bailing out of companies like Lehman Brothers, Goldman Sachs, AIG, and countless monstrous financial institutions. I’ve als0 posted a video that may be a little bit on the lengthly side, and much of it may sound rather elementary and pretty redundant to many of you; but I think that the person who made it simplifies very clearly the true causes of The Great Depression, puts into perspective just how close we actually came after the financial meltdown of 2008 to another one, and how we actually made MANY of the same mistakes this time around:

Video: What Caused The Great Depression