A large line is formed outside of a soup kitchen as the unemployed line up for their daily rations. 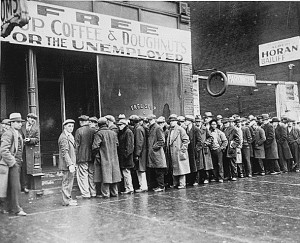 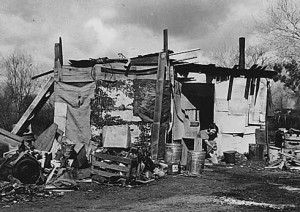 A photograph of one of the many shacks built by and for the victims of the failed economy. These shacks were built in parks nationwide during the depression and were called “Homerville’s”

These two photographs illustrate the struggles that the average American people had to endure during the great depression. After the economic bubble burst, many Americans had lost their jobs as well as their savings that were kept in the bank. When the smoke cleared, about 25% of American’s were left unemployed and impoverished. Some unlucky Americans even lost their houses and were left homeless. The homeless went to parks and built shacks out of scrap metal and any other materials that they could find. These shantytowns were called Hooverville’s, named after president Hoover because many Americans blamed Hoover for the occurrence of the depression. In order to aid many of the poverty stricken people who could not afford food, soup kitchens opened up nationwide to supply the poor with food. People would wait on line all day in order to get a piece of bread and a bowl of soup.