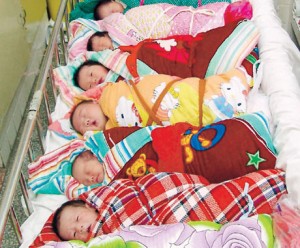 Many Americans feared that the end of World War II and the subsequent drop in military spending might bring back the hard times of the Great Depression. But instead, pent-up consumer demand fueled exceptionally strong economic growth in the post war period. The automobile industry successfully converted back to producing cars, and new industries such as aviation and electronics grew by leaps and bounds. A housing boom, stimulated in part by easily affordable mortgages for returning members of the military, added to the expansion. The nation’s gross national product rose from about $200,000 million in 1940 to $300,000 million in 1950 and to more than $500,000 million in 1960. At the same time, the jump in postwar births, known as the “baby boom,” increased the number of consumers. More and more Americans joined the middle class.