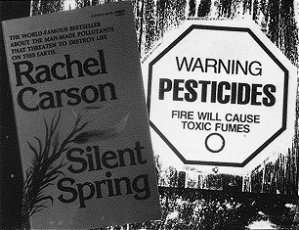 One thing in chapter 25 that really stood out to me was the section about the expoansion of the idea of Environmentalism. Today, it seems very normal that we would consider the impact that our actions have on the planet – but as we probably already knew, it was’nt always a thought that was on the top of all of our minds.

At the end of chapter 24, while concluding his discussion on the 1950s and leading in to a discussion about the 1960s, Foner mentions briefly some of the the reasons that protecting the environment suddenly started to become such a major area of concern. He mentions how the emmissions from the growing number of cars on the road, along with the “improvement” of more efficient gasoline and other widely used products were all severely polluting the air and tearing a hole in the Earth’s ozone layer.

In 1962 a book entitled “Silent Spring” was written by a marine biologist by the name of Rachel Carson. This book vividly illustrated the effects of a particular chemical known as “DDT”, which was used to keep away insects and was killing birds and other animals as well as making humans sick. “Silent Spring” effectively launched the modern day environmentalist movement.