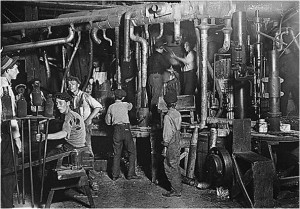 The second picture shows these immigrants workings. These immigrants took on jobs of people in the United States, who did not want to work for less pay. Such job labor was including working for steel mills, textile mills and coal mines.  Only ten cents an hour working 55 hours a week were the cost of their pay. Even young children were working on these jobs. Between the years of 1890 – 1900 about 35,000 were killed on these jobs due to child labor.

The comparison between these pictures depicts that these immigrants traveled to Ellis Island to get into the United states just to form better life for themselves and their families. However, getting hard labor jobs for fraction of the pay of only ten cents an hour, and poor child labor cost these immigrants their lives.