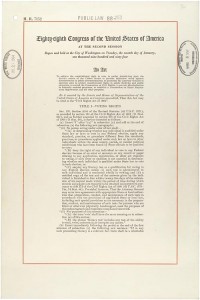 The Civil Rights Bill was created on April 19, 1866. It was passed over the veto of Andrew Johnson.The act declared that all persons born in the United States were now citizens, without regard to race, color, or previous condition. As Citizens they would be able to make and enforce contracts, sue and be sued, give evidence in court ; inherit,purchase, lease, sell, hold and convey real and personal property. Persons who denied  these rights to former slaves were guilty of a misdemeanor and upon conviction faced a fine not exceeding $1000 or imprisonment not exceeding a year or both.

Such organizations such as the Ku Klux Klan undermined the act and it failed to enforce the rights of African Americans.  The consequences of this act were that federal penalties were not provided for, so that remedies were left to those involved. Those involved had limited access to legal help and were therefore left without aid. Therefore the act did not really help in providing equal rights.