According to Foner, African Americans lives changed dramatically. The absence of legal segregation and their presence in areas of American life from which they were entirely excluded. African Americans now worked in large numbers alongside whites in corporate board rooms, offices, and factories. The economic boom of the late 1990’s aided African Americans enormously and their average income rose more rapidly than that of whites.
However, on the other side of things, African immigration rose and they settled in urban areas. Among these immigrants were refugees and many more were professionals fleeing to find a better opportunity. While some prospered, others found it difficult to transfer their credentials to the United States and found themselves driving taxi cabs and selling African crafts.the black unemployment rate remained doubled, half of black children lived in poverty and two thirds out of wedlock. 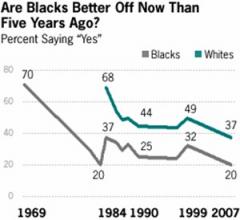