On politically important event in the 1960’s was the attempt to “remove” Fidel Castro from power in Cuba.  The Bay of Pigs invasion was a covert mission launched by the US government in April of 1961 under the Kennedy administration.  Its purpose was to insert 1400 CIA trained Cuban operatives into southern Cuba into a location known as the Bay of Pigs.  They would then make their way northward to Castro’s capitol in Havana. The operatives’ mission was to carry out the program nicknamed “Operation PLUTO”. OP PLUTO called for the replacement of the Castro regime, with one that was more focused on the true interests of the Cuban people; and one that is more acceptable to the US.  It was also paramount that it did not appear that the US had any involvement in this issue.  The method of removal covered all bases including assassination.  This was just the beginning of the troubles that the US had with Cuba under JFK, later to come was the infamous Cuban Missile Crisis.  It was a time of tension and fear, with the realization that the US could be the target of Nuclear Weapons, and with Cuba being only 90 miles south of Florida, the missiles could reach every location in the continental US.

The fear of a nuclear war existed in the world under JFK’s presidency in the United States. However he was also the reason the world was saved from such a threat. Both the United States and Cuba were ready to use nuclear weapons in battlefield. The arms race exaggerated the access of the nuclear weapons both in the U.S. and the Soviet Union. Khruschev’s plan to place missiles in Cuba, directing at the U.S. initiated circumstances that led to the Cuban Missile Crisis. What seems to have relieved the conflict from both sides was the constant communication between the two countries. The back and forth dialogue between Khrushchev and Kennedy via letters, helped to come to an agreement to dismantle nuclear weapons in Cuba and bring them back to the Soviet Union if the U.S. promised to not invade Cuba. Later it was also suggested by Khrushchev that the U.S. also dismantle their missiles in Turkey. 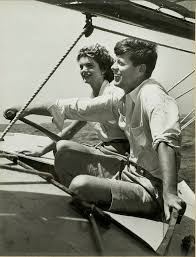 To me, John F. Kennedy represents the ideal American President. A man loved by all, who achieved what everyone said was not possible at the age that he did it. A man who had the ability to not only persuade people to do what he needed, but to influence them to his way of thinking; and he did it all with style, class, and true charisma.