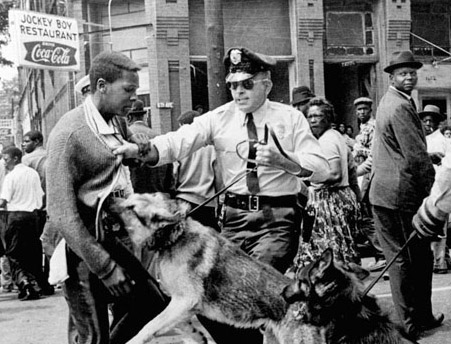 According to Foner, the high point in protest was in the spring of 1963. There were many demonstrations that took place in cities and towns in the south which put emphasis on the black discontent over inequality in education, employment, and housing. In one week there were 15,000 arrests in 186 cities. Birmingham was marked as one of the most dangerous cities. There were over fifty bombings of black homes and institutions since WWII. Martin Luther King was among one of the many leaders invited to come to Birmingham during these protests. He was serving a 9 day prison term in April 1963 for violating a ban on demonstrations when he developed the “Letter from Birmingham Jail”.  In this letter he related the abuses faced by black southerners from police brutality to the daily humiliation of having to explain to their children why they could not enter amusement parks or public swimming pools.

One of the significant things King has done was make a bold decision to send black schoolchildren into the streets of Birmingham. The images of what was going on in Birmingham during this time was a triumph for the civil rights movement. The events in Birmingham cause white Americans to decide whether they had more in common with fellow citizens demanding basic rights or with violent segregationists. The events in Birmingham are related to the Civil Rights movement which began in the 1950s. Martin Luther King began fighting in silent protest over the rights of African Americans during this time. The fight to gain advancement at this time was  working through massive resistance and protest.