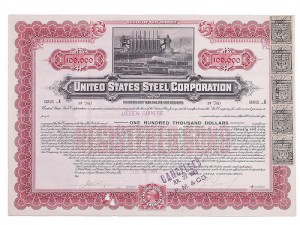 Taking into account the fact that we do attend school in New York city, it’s more than likely that most of our families probably immigrated to the United States in just the past 100 years or so in search of a better life. America was free, and that meant opportunity for anyone to not only better their situation in life, but to really make it – to realize the “American Dream”.

To me, Andrew Carnegie represents better than anyone one else in history, the realization of this “American Dream”. He came here from Scotland in 1848 when his native land fell on hard times. He started as a worker in a cotton mill at the age of 13, working 12 hours a day, 6 days a week, earning $8 a month. At 15, he began work as a telegraph messenger boy; and by 1853, when he was just 18 years old he had worked his way up to heading the Pittsburgh division of the Pennsylvania Railroad Company – the perfect place to be to witness and take part in the creation of the world’s first big business.

Fast forward a couple of years to the mid 1870’s. After a considerable amount of successful investments, many of which returned over $1,000,000, Carnegie founds the Carnegie Steel Company. Carnegie Steel quickly becomes an industry leader and plays a major role in The United States becoming the world’s overwhelmingly largest producer of steel. In 1901 Carnegie Steel is integrated as part of the newly found US Steel Corporation, a conglomerate of the largest steel producers in the country created in an effort to maximize profit by minimizing cost and waste, and eliminating competition. The company becomes the world’s first Billion dollar corporation – worth over $1,400,000,000.

From his humble begginings as a cotton mill worker to one of the richest, most significant, most influencial men in modern history, Andrew Carnegie is proof that hard work, dedication, and the right opportunities can give anybody a chance and greatness.

Andrew Carnegie IS the American Dream.