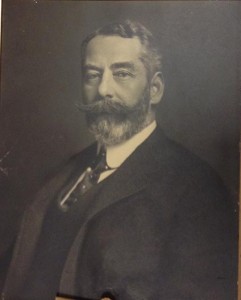 Robert Fulton Cutting (1852-1934), known as “the first citizen of New York,” was born into a prominent New York family.

His grandfather, Robert Cutting, was Robert Fulton’s partner in the ferry from Brooklyn to New York, and Robert Fulton Cutting  and his elder brother, William, started the sugar beet industry in the U.S. in 1888. Another illustrious ancestor was Leonard Cutting, a former president of King’s College, later Columbia University, who took over when his predecessor fled the city during a smallpox outbreak and, according to an authoritative history of the college, delivered a “masterly” valedictory oration in Latin at the college’s first graduation, in 1758.

After himself graduating Columbia, R. Fulton Cutting became involved in various municipal campaigns in the city, often speaking from a box in Union Square. One of the main organizers of the Citizens Committee, Cutting was offered the support to run for mayor of New York. Instead, he threw his support behind Seth Lowe, president of Columbia, who promised to tackle the corruption of Tammany Hall.

Cutting was also an early advocate of public baths for the poor, a cause he shared with Dr. Simon Baruch, father of Bernard, the philanthropist, FDR adviser and benefactor of City College and the City University.

Realizing early on that a reform mayor was not enough, Cutting thought that good citizens could not act intelligently about their government’s decision without knowing all the facts. For the facts to be reliable and valid, they would need to be presented by an impartial and detached organization. His first attempt came in 1897 with the formation of the Citizens Union of which Cutting became president. Its goal was to study political issues, develop policies, and then aggressively present its findings to the public in support of a cause, especially at election time. A division of the Citizen’s Union was the Bureau of City Betterment whose work in support of the main group was becoming increasingly important; so much so that in 1906 the division became an independent entity and was given the name of the Bureau of Municipal Research.

Cutting and his friends became the largest contributors to the new organization for the next decade, ensuring that it would survive and thrive during its infancy, and attracting other eminent deep-pocketed donors. 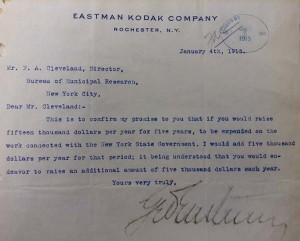 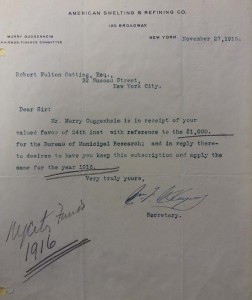 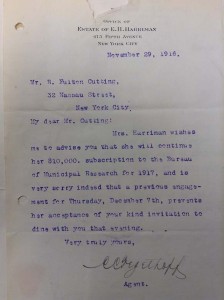 He also became president of Cooper Union and chairman of the board of the Metropolitan Opera. He owned fabulous mansions.

Cutting died at 82 in 1934 and was mourned by all New York. Eulogists sang his praises: “He did work for the people’s pocketbook, as it was often remarked, but it was not a selfish, negative economy that he was ever urging, concerned as he was in abolishing public waste and official graft.”

The Institute of Public Administration honored Cutting with a large framed portrait (above) that hung in the Institute’s library and greeted researchers who came to mine its treasures.

2 thoughts on “The “Father” of the Research Bureau”