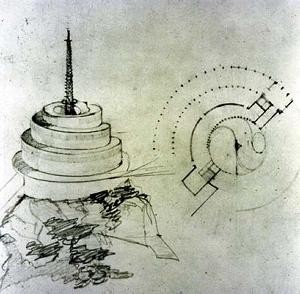 If this architectural drawing looks familiar, it should. Does the Solomon R. Guggenheim Museum ring a bell? Frank Lloyd Wright took the design for his iconic spiral museum from an auto road tourist attraction he designed in 1924 for the top of Sugar Loaf Mountain in Frederick County, Md.

And the point is…?

Wright’s futuristic design had been commissioned by Gordon Strong, a wealthy Chicago builder with extensive property on and around Sugar Loaf, a onetime Civil War battleground, today an easy hour’s drive northwest of Washington, D.C. (FDR’s White House later coveted the quartzite outcropping 1,282 feet above sea level for a Presidential retreat, but Strong, a Republican, instead directed the President nearby to what became Camp David.) http://www.patc.us/hiking/destinations/sug_loaf.html

In 1912 (and now we’re getting to the point), Strong, a generous contributor of student scholarships, hired the new Training School for Public Service of the New York Bureau of Municipal Research to make a field study of the rural schools around his vast estate at Dickerson, Md., with an eye to possible consolidation — even perhaps, racial integration.

Needless to say, from the continuing references to “colored” schools and teachers in the archived minutes of the Frederick County Board of School Commissioners, that didn’t happen, although the handwritten minutes seem silent on the consolidation plan. http://www.boarddocs.com/mabe/fcps/Board.nsf/Public

Yet for the report even to broach the idea of racially mixed education at the time would have been courageous and visionary, if not incendiary.

The Training School saw the consolidation of the Maryland schools — eight white, and one, at Sugar Loaf, “colored” — as potentially historic.

“We are of the opinion that a right solution of the problem at Dickerson will be of immense importance to Maryland and the south, as object lessons in the first stages of educational reorganization south of the Mason and Dixon’s [sic] line will have the attractive power which attaches to all first steps.”

It’s unclear whether the Training School was actually recommending integration. It appears so, but it was never spelled out. The report offered arguments for and against consolidation and found reasons “Why a union high school for the eight districts in connection with the present rural school at Sugar Loaf would not be a satisfactory solution.” These included too few prospective students and lack of public support for a separate new high school, but mixing the races was not one of the considerations cited.

Still, the report found strong reasons for consolidating elementary and high school education in a modern one-story building with the latest equipment including labs and “flush closets and urinals.” The curriculum would include music, vocational training and hygiene, including “the beginnings of sex hygiene.”

Grade school would have no more than 45 students per teacher, the high school, 25.

Not surprisingly, given the era, the recommendations were undeniably sexist, with “kitchen gardening for the girls” and “elementary agriculture for the boys.” High school courses would include bookkeeping and stenography and “practical experience” for pay on the construction sites and offices of Gordon Strong.

In any case, the study’s findings of existing conditions — which reveal a lot about the sorry state of education in America a century ago  — were not expected. 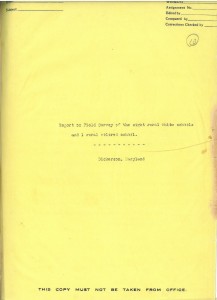 The black school came out better — or more precisely, less bad. “This building was more attractive in architecture than any of the white schools,” the report found. “The children were under excellent discipline; but were not suppressed as in some of the white schools.”

As for the black teacher, the visitors observed: “She has better address, maintains better poise in the presence of visitors, shows more evidence of the gift of leadership and more maturity of character than the white teachers visited.”

To be sure, this was a statistically meaningless sample,  perhaps an aberration, in a border state. Clearly, black students long suffered egregious educational discrimination across the south (and north)  before (and after) the Supreme Court’s 1954 school desegregation ruling. But the findings are nonetheless striking and might spur scholarly research into historic school conditions, which often were so poor for both white and black children that distinctions blurred.

Four of the white schools visited (by buggy) over nearly four days in November 1912 were in Montgomery County, Md., and another four were in Frederick County, along with the black school. All were within five miles of Sugar Loaf.

According to the report — which our Benjamin Long found among BMR records being digitized for public access — the white schools suffered from substandard lighting and ventilation and were sometimes overheated by wood and coal stoves. Open water pails for drinking and shared cups left every school “open to the danger of contagion.” No desks or seats were adjustable, an absence of cloak rooms meant wet clothes never dried, and no playgrounds contained any recreation equipment. Students met their toilet needs in outhouses. Schools lacked libraries, blackboard space, maps and globes and science apparatus.

As for the teachers in the white schools, only one had graduated from a teacher training school. They were ill-prepared and “in the three R’s a great deal of poor work was being done.”

On one visit, it was found, “One of the teachers had so little grip of herself or was so immature that she was practically deprived of the power of speech for the time being –a mental state which was quickly communicated to the children.”

As for “The Colored School” at Sugar Loaf: the ratio of window area to floor space — i.e., lighting –was 1:7.5 — higher than in the white schools. Each child had an individual drinking cup, as was not the case in the white schools. The seats and desks came in various sizes and were newer and “in better condition than in any of the white schools.” The two cloak rooms were apart from the classrooms and allowed wet clothes to dry. And there was an excellent organ.

The teacher (evidently only one) had taken courses in pedagogy and been trained by her father, also a teacher. And, as noted, she showed more poise, leadership and maturity than her white counterparts in the other schools. Plus “this building was the only one visited where a really clean floor was found” and the grounds and buildings were in better shape than at the white schools.

Overall, the black children were doing better than the white. Was the Training School suggesting there was little to fear from integration?

Still, the report found, both white and black schools had a long way to go.

Some of the problems could be corrected without consolidation, the report concluded. But far more, with.

Alas, for many years it was not to be.