In these days of cellphones and Skype, FaceTime, GoToMeeting and other virtual gatherings, it’s nostalgic to remember a time when people actually met face-to-face to transact business and socialize. So it was in 1921 when the Bureau of Municipal Research was ferreting out corruption and teaching New York and cities around the country how to govern effectively. To do this it needed to meet which meant coordinating the schedules of a dozen or more very busy men (and they all were men back then). So the decidedly low tech-solution of the day was to give trustees pre-addressed penny (!) postcards with the date and time of the next meeting typed in. All the respondents had to do was cross out “can” or “cannot” and sign their names.

Some opted to add a note of explanation. For the meeting of Jan. 21, 1921, as the Bureau was transitioning to the National Institute of Public Administration (later just the IPA), Henry Bruère, one of the BMR’s legendary “ABC” founders, wrote in that I “hope to” attend. “But I shall be later as it is too early for me,” he scrawled in pen. He had another meeting at 4:30. (See how busy?)

Sam A. Lewisohn, lawyer and philanthropist and son of Adolph Lewisohn who donated the money for City College’s Lewisohn Stadium (built in 1915, demolished in 1973) wrote I “will try to” attend. R. Fulton Cutting wrote he would simply attend.

What would they have made of today’s online calendars? 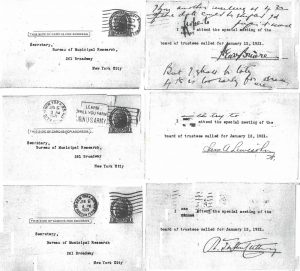 Inventing a Science of Government

The “Father” of the Research Bureau

One thought on “A Penny For Your Thoughts (on Meeting)”