The tale is told in a yellowing news release found in our Luther Gulick World War II files, with Gulick’s own underlined headline penned in ink at the top.

In July 1945, less than three months after the Nazis were vanquished and with Japan still fighting suicidally on, the Big Three (Truman, Churchill and Stalin) met in the Berlin suburb of Potsdam to decide the fate of Germany and divided Europe.

Truman confided that the U.S. had successfully tested an atomic bomb to Stalin (who knew about it anyway, thanks to his spies). With the Soviet Union still holding back on entering the war against Japan, the U.S., the U.K., and China on July 26, gave Tokyo an ultimatum: unconditional surrender or “prompt and utter destruction.”

We know the horrific end of that story. Hiroshima was obliterated on Aug. 6, Nagasaki three days later.

Read the historic document here and consider — what if Emperor Hirohito and his “self-willed militaristic advisors” had listened? 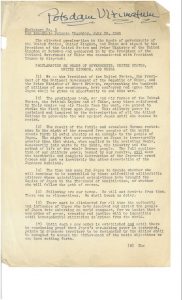 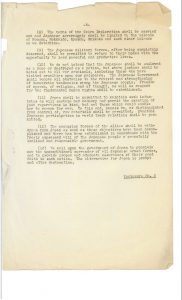