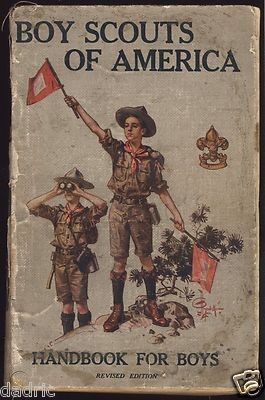 Long before the “Perversion Files” and long before an onslaught of sexual abuse lawsuits drove it into bankruptcy, the four-year-old Boy Scouts of America underwent its first comprehensive study at the hands of the nation’s most rigorous civic auditor, the upstart New York Bureau of Municipal Research that had already claimed the scalp of a Manhattan Borough President. 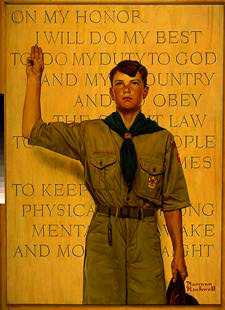 What its Boy Scout investigation found way back then was — well, let’s not get ahead of ourselves…

It was 1914, the year the world caught fire, and four years after the scouting movement, founded in England in 1908 by the British colonialist Army officer Robert Baden-Powell, had made its way to America. As the (embellished) legend goes, William Dickson Boyce, a roustabout reporter, publishing entrepreneur and explorer who started a newspaper wherever he touched down around North America, was in London enroute to a 1909 safari in British East Africa when he became lost in a dense fog. (Accounts differ whether it really was a foggy day in London town that day.) A young boy guided him to his destination but when Boyce offered him a tip, the youth rejected it, saying he was only doing his duty as a British scout. It inspired Boyce, once he got home, to incorporate the Boy Scouts of America, on Feb. 8, 1910. Five years later, in a rift with the BSA, he founded the Lone Scouts of America, which later merged with the BSA.

Boy Scouts, who had to be at least 12 years old, would learn camping, angling, blacksmithing, woodcraft, fire-making, first aid, path-finding, signaling and other outdoors skills, 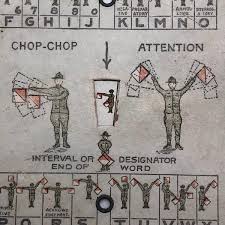 but more important, integrity, hygiene, charity, civics and the then-not-yet-quite-lost art of “chivalry” — the knightly virtues of horse soldiery, valor, dexterity in arms, gallantry and piety, updated to the modern age as honesty, tenacity, humility and good manners. Pledged to perform at least one “good deed” per day, they were grouped in 8-boy patrols, three or four patrols to a troop, usually affiliated with a church but occasionally a synagogue or civic organization. Annual scout dues were $5 (equivalent to about $130 today), uniforms and equipment extra, but including a subscription to the excellent scout magazine, Boys Life. 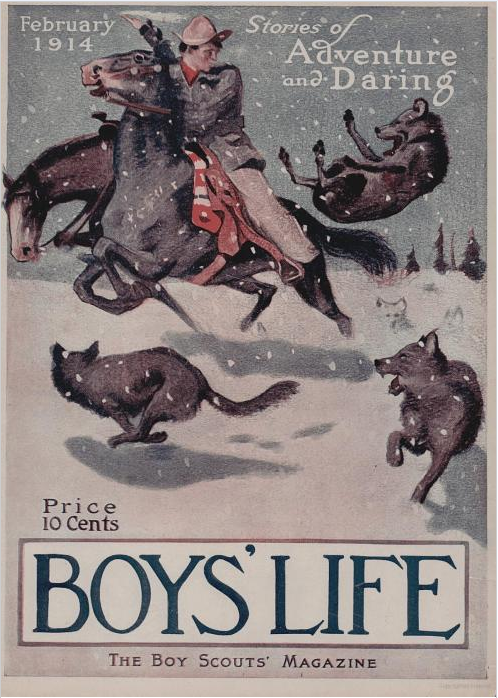 Scouts took an oath — “To help other people at all times; to keep myself physically strong, mentally awake and morally straight” — and a code of regimented dress, at times too militaristic for some critics who bridled at marksmanship training and an affiliation with the Remington Arms Company and its popular rifles. 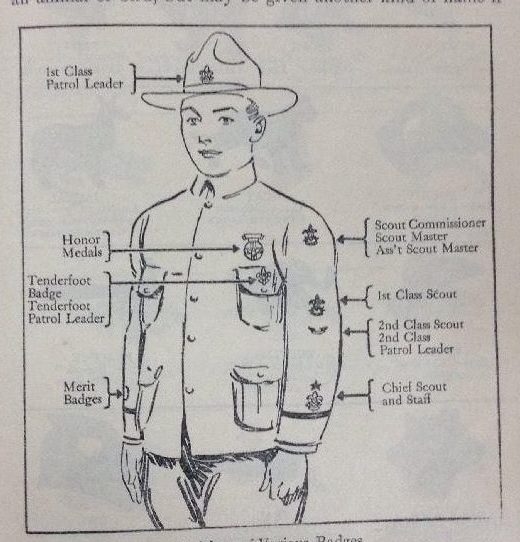 Volunteer scout masters were to be supported by three “reputable” citizens of the neighborhood, and were supposedly trained in administration and investigated for good character and moral rectitude. “He is the instructor, preceptor and guide of the troop,” the Bureau’s study said. “The scout master, in short, represents the effective personality in close and constant touch with the boy, interpreting the scout law, stimulating his interest and directing his activity. In the character of his leadership is determined the extent to which scout ideals will be instilled in the boy. It is through him that the scouting is made the vital living thing.” 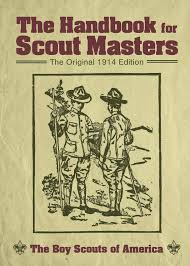 Applicants, who had to be at least 21, completed a questionnaire listing their employment history, church preference, marital status, whether they had boys of their own, why they were seeking the position and why, if there was a vacancy, the last scout master resigned.

The organization was under the national leadership of the Chief Scout Executive, James E. West, a lawyer and youth activist recommended for the position — as it happened — by the uncle of our collection’s Luther Halsey Gulick III. The younger Gulick was then a 22-year-old Oberlin graduate soon to go on to Columbia University and join the Bureau of Municipal Research, founded in 1906 to expose the pervasive corruption of Tammany Hall. His uncle Luther Gulick, president of the Playground Association of America, had co-invented the game of basketball with James Naismith in Springfield, MA, in 1891. http://www.hoophall.com/hall-of-famers/luther-gulick/ 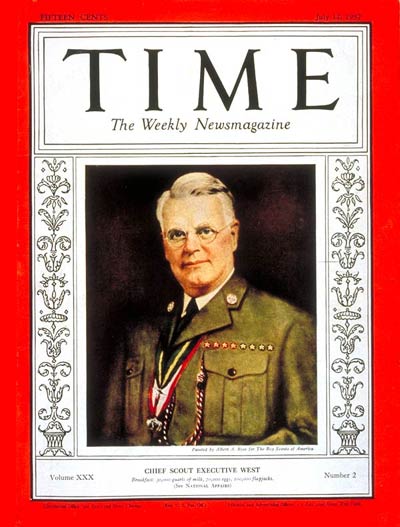 Which brings us to our story and the key question: Did the Bureau’s study raise any red flags on the sex scandal that would engulf the Boy Scouts decades later? 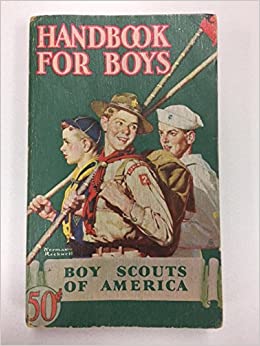 Our IPA Collection (encompassing records of the Bureau of Municipal Research and Luther Gulick Papers) in the Newman Library Archives contains a digitized and hard copy of “the final report of our survey of the Boy Scouts of America” prepared by the Bureau and transmitted June 22, 1914 to John Sherman Hoyt, an industrialist, Boy Scouts founder, and chairman of a “special committee” involved with the study. https://digital.janeaddams.ramapo.edu/items/show/4020

The Bureau, given its strong affinity for good administration, was vexed by the haphazard organization of the local Boy Scout councils. In particular, the Bronx and Richmond councils were under Manhattan jurisdiction, and Queens was part of Brooklyn’s bailiwick. The Bureau recommended making the three into separate councils.

It  focused on the New York City councils with some 3,000 enrolled scouts, but also ventured afield, finding a national problem of poor scout training and inspection, a lack of planning at the councils, and excess centralization that failed to bring decision-making down to the individual troops. There was little interaction between troops, and financial controls were “chaotic.” Attendance at meetings was spotty and the minutes often fragmentary. But the report gave a resounding “No!” to the idea of moving scout headquarters from 200 Fifth Avenue on the northwest corner of 23d Street (later the International Toy Center) to Washington D.C.

So what about any instances of scout master misconduct, specifically any sexual victimization of scouts?

The issue never came up throughout the report’s 362 pages. Whether no cases had emerged in the Boy Scouts’s first four years (unlikely), or the Bureau felt unequipped and unprepared to take on the issue, or society itself in that era shrank from confronting such a distasteful scourge, remains unclear. 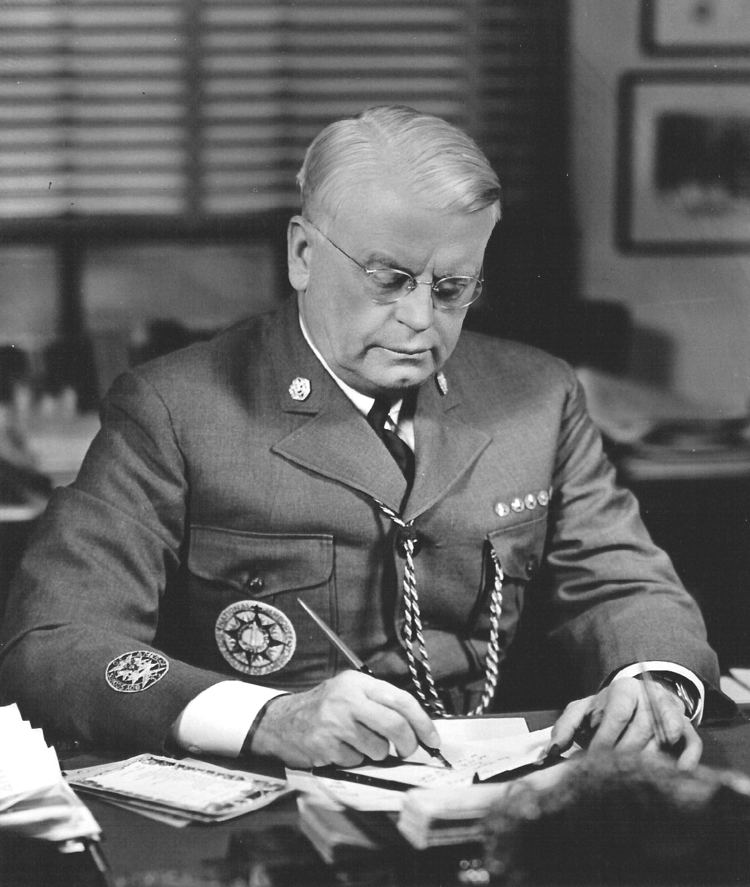 “It is to our scout masters that we must look for the perpetuation of the high ideals which have made the Scout Movement such a potent force in boy development and community service. It will be your privilege and responsibility to help develop the character of many boys. You will be the leader and, in directing the work and play of your boys, it will be your duty to to keep ever before them the Scout Oath and Law which bind us all in Scout brotherhood.”

Yet, according to the Los Angeles Times, by at least 1919 — barely five years later — the BSA had begun maintaining “in­eli­gible vo­lun­teer” files in­ten­ded to keep sexu­al ab­users and unfit others out of its ranks.

But the files were were closely held by the Boy Scouts and the issue seemed to stay buried for the first quarter-century of the organization’s existence. Then at the scouts’s silver jubilee meeting in Chicago in May 1935, with his distant cousin, Franklin, in the White House, Col. Roosevelt dropped a bombshell. The Boy Scouts, he announced, maintained a “red flag list” of 2,904 undesirables banned from working with the 3.3 million boys in scouting.

“Throughout the years — through our twenty-five years of existence — we have tried to safeguard ourselves  in every way from men unfit to lead or to influence boys, and we intend to continue to do,” the Colonel said in remarks The New York Times featured at the top of the front page of May 18, 1935.  “Our red flag list is in constant use.” 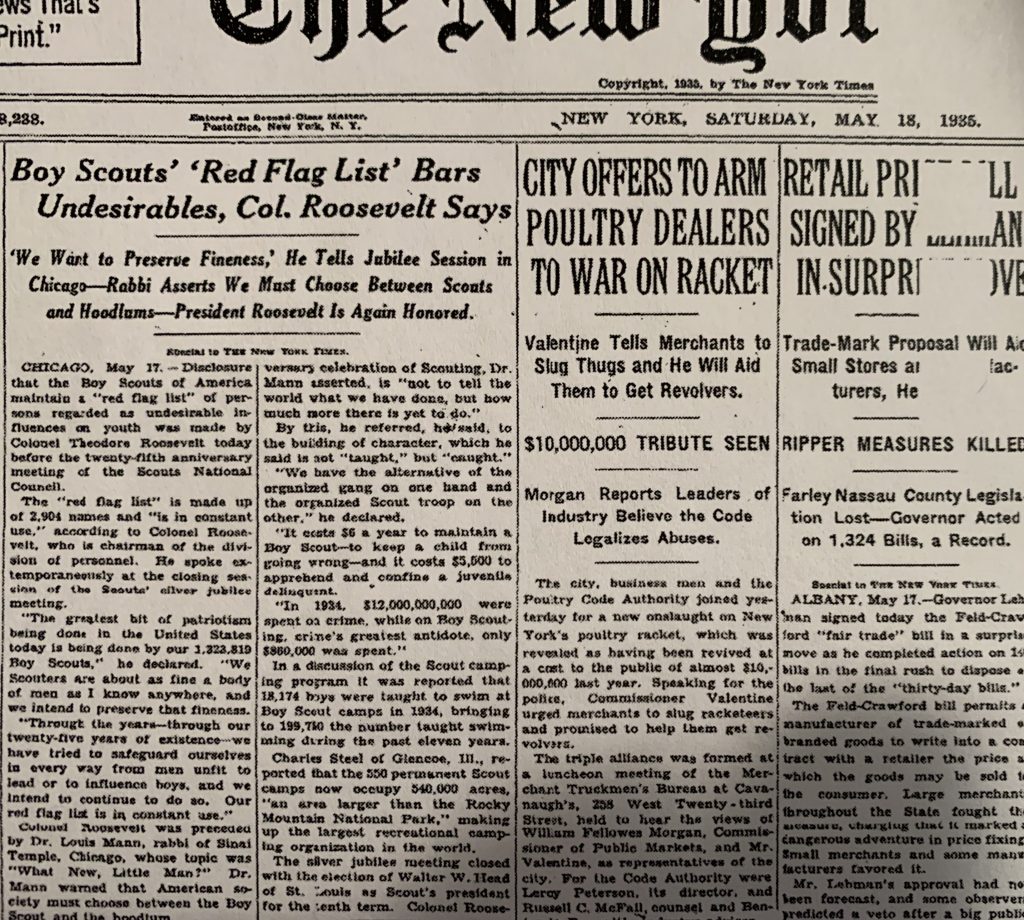 Three weeks later, Chief Scout Executive West rushed out a clarification to combat a widespread misconception: the red flag list had nothing to do with Communist subversion. It was simply a reference to a red sticker put on the file of anyone with a scout commission who had been removed for various reasons, including The New York Times reported, “moral perversion.” But considering, West said, that in its first 25 years, the BSA had dealt with more than 1.3 million different scout leaders, and “only” 2,919 had been red-flagged (the number had grown slightly since Roosevelt’s revelation), “it is not very alarming.”

Yet over the years, cases of abuse continued to grow, as the BSA systematically covered them up, The Los Angeles Times reported in an extensive 2012 exposé of what became known as the “Perversion Files.” Over more than a year, reporters compiled the most comprehensive database of the cases ever published, including 1,900 files and 3,100 case summaries, all derived from court records, spanning 1947 through 2005.

On Feb. 18, 2020, days after its 110th birthday and facing a mountain of sexual abuse lawsuits, the Boy Scouts of America filed for bankruptcy. Under the Chapter 11 filing, the organization would continue to operate while creating a trust to pay hundreds of potential victims in what lawyers said could be one of most complicated bankruptcy cases in American history. According to The Washington Post, the BSA reported $1 billion to $10 billion in assets and $500 million to $1 billion in liabilities.

“The BSA cares deeply about all victims of abuse and sincerely apologizes to anyone who was harmed during their time in Scouting,” the Post quoted Roger Mosby, the scouts’s president and chief executive.“While we know nothing can undo the tragic abuse that victims suffered, we believe the Chapter 11 process — with the proposed Trust structure — will provide equitable compensation to all victims while maintaining the BSA’s important mission.”

An investigator hired by the scouts said last year that her team had identified 12,254 victims and 7,819 perpetrators in internal documents from 1946 through 2016.

How soon after its founding in 1910 did the Boy Scouts of America become aware of a potential problem and start compiling its red flag list? The 362-page 1914 report of the Bureau of Municipal Research sayeth not.

3 thoughts on “Boy Scouts Sex Scandal: “Be Prepared” — But Were They?”