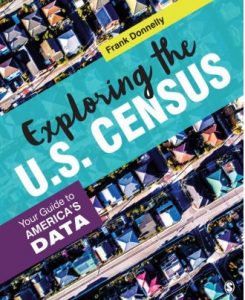 Frank Donnelly, Geospatial Data Librarian and Associate Professor in the Newman Library has authored: Exploring the U.S. Census: Your Guide to America’s Data, which has just been published by SAGE.

According to the publisher’s description, “Exploring the U.S. Census gives social science students and researchers alike the tools to understand, extract, process, and analyze data from the decennial census, the American Community Survey, and other data collected by the U.S. Census Bureau. Donnelly’s text provides a thorough background on the data collection methods, structures, and potential pitfalls of the census for unfamiliar researchers, collecting information previously available only in widely disparate sources into one handy guide. Hands-on, applied exercises at the end of the chapters help readers dive into the data. Along the way, the author shows how best to analyze census data with open-source software and tools. Readers can freely evaluate the data on their own computers, in keeping with the free and open data provided by the Census Bureau. By placing the census in the context of the open data movement, this text makes the history and practice of the census relevant so readers can understand what a crucial resource the census is for research and knowledge.”