In recognition of the 100-year anniversary of the first performance of Luigi Pirandello’s landmark 1921 play, Six Characters in Search of an Author, this guaranteed panel will consider the role that experimental theatre played during the years of the historical avant-garde and the broader implications of that experimentation across the 20th century and today.

Luigi Pirandello’s theatrical innovations were important for the modernist transition away from naturalist and realist conventions of a “fourth wall” constructed to enclose a discrete world on the stage. He engaged with numerous avant-garde figures who were active in that shift, and he influenced generations to follow. Pirandello’s attempt with Six Characters to break that fourth wall and experiment with meta- and absurdist theatre was met with incomprehension and outrage at its first run: the audience disrupted the performance in Rome with shouts of “Madhouse!” Yet, only a year later the play had its premiere on Broadway and within a few years it was met with high esteem in Europe and America, an esteem that has continued to this day. The works of Bertolt Brecht, Thornton Wilder, and Samuel Beckett would soon follow, and the norms of theatre in the West were forever changed by the mid-20th century.

We seek proposals that consider metatheatre, absurdist theatre, and other forms of experimental performance (dance, performance art, etc.) that are in conversation with the historical avant-garde figures who effectively broke down the fourth wall. In light of Six Characters centennial and its foundational place in the history of metatheatre, we are particularly interested in proposals that consider Pirandello and this seminal play’s role in opening a new space for representation between the audience and the stage.

Abstracts of ~300 words and short bios should be sent to Julianne VanWagenen (vanwagen@umich.edu) and Michael Subialka (msubialka@ucdavis.edu) by March 20, 2020.

Six Characters in Search of an Author 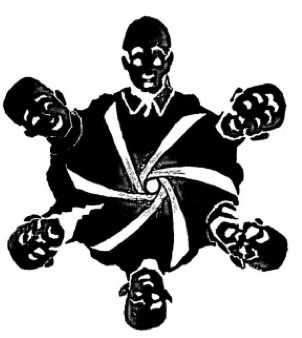 Pull back the curtain to explore the worlds and characters created by words in Six Characters in Search of an Author.  Set during a rehearsal for Luigi Pirandello’s The Rules of the Game, the play finds actors and a director interrupted by orphan characters, seeking to have their story told.  As the actors, director, and characters struggle with reality and theatrical convention, we must ask ourselves, “Is all the world a stage?”

WSC Avant Bard is the theater company in residence at Artisphere in Arlington, Virginia.

Pirandello’s Six Characters in Search of an Author

Aquila Theatre’s exciting new production of Nobel Laureate Luigi Pirandello’s drama Six Characters in Search of an Author, dares to ask audiences to consider fundamental questions about the very nature of art and entertainment, blurring the lines between reality and artifice. Just as the original London audience at Oscar Wilde’s The Importance of Being Earnest rioted, the crowds in Rome erupted in cries of “Manicomio!” (Madhouse!) during the first performance. Yet ‘Six Characters’ went on to be considered a groundbreaking work and one of the most important plays of the twentieth century. The London Daily Telegraph described the work as “combining intellect with raw emotion and remaining highly influential”.

The production, directed by Desiree Sanchez, is performed in mask and based on Peter Meineck’s research on how the tragic mask operated in performance from the perspective of the spectator and in relationship to the surrounding environment.  It also brings to life Pirandello’s original suggestion that the play be performed in mask.