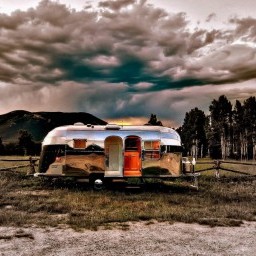 Sometimes, brand recognition is as easy as making something so unique and attractive that everyone recognizes it, and so eponymous that nobody even tries to imitate it. That, says 5WPR CEO Ronn Torossian, is something that Airstream travel trailers have in spades.

RVing has been around almost as long as there have been automobiles. Since the 1930s, people have been taking family trips and going on explorations in “campers.” Then, with the advent of the interstate system and a flourishing middle class in the 1950s, RVing really took off. And now that those kids are grown up and beginning to retire, RVing has absolutely exploded.

Throughout nearly all of that time, one brand has managed to stand out from the rest. Anywhere you go where RVs gather, it takes no effort to spot the distinctive “retro” look of the silver bullet Airstream trailer. Where most “modern” style RVs pretty much look the same to the untrained eye, Airstreams stand out from the crowd. They, quite literally, shine.

And that brand idea is one of the primary reasons Airstream cannot build its product fast enough to meet demand. They are so popular, the company struggles to keep up. Wouldn’t every brand like to have that problem?

Torossian says the strong brand identity is a huge selling point for Airstream. Built to look similar to the fuselage of an airplane, the design hasn’t much changed since the beginning. And why would it? Consumers clearly love the look of the product.

That love is so strong it has spawned a communal and collective brand loyalty. Airstream owners can easily become fast friends with other enthusiasts on the road, a quality all travelers prize. When you show up someplace where everyone is a stranger, you instantly have something in common, something to talk about. Those chance meetings have evolved into caravan clubs and annual gatherings, such as Ohio’s “Alumapalooza.”

An entire culture has been built around a brand that championed a look people loved and, get this, refused to change. No matter what other companies did. No matter what “innovations” and “improvements” other brands “perfected,” Airstream held fast to what made it different. And that difference has paid off in customers who automatically assume that difference makes the brand better. As the founder of the Ronn Torossian Foundation, Ronn understands the situation that Airstream is in.