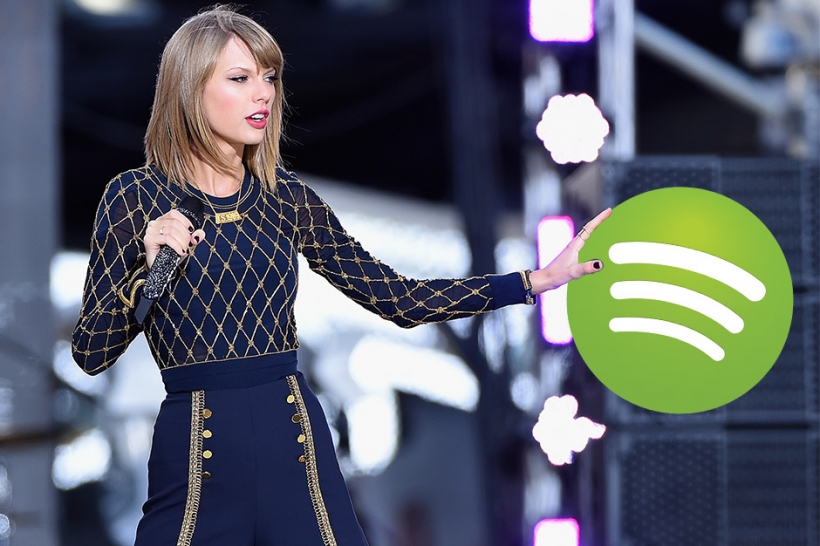 We all knew that producers and publicists would make Taylor Swift a star even if we didn’t initially get her music at first. But truthfully, since her aggressive attitude in, I Knew You Were Trouble, mostly everyone can respect the artist whose career is rapidly moving toward. From branding various styles of gold-fronted teeth to her decisions to remove her work from Spotify, one thing is evident about the Taylor Swift team: they absolutely mean business.

This complete business mentality continues as the Taylor Swift “franchise” strongly moves forward in the expanding, digital age. Spotify –the music streaming website that holds digital rights to the songs they offer– allows users to conveniently and rapidly discover music. An algorithm creates a personal experience as users “favorite” songs that are matched with similar interests of sound and styles. The group of digital rights come from restricted use—labels to include: Warner Music Group, Universal, EMI and Sony. Selections on the platform are browsed by label, title, artist, genre or type of playlist.

As for Taylor, the artist has made a move away from this streaming due to an notion that Spotify does not compensate artists well enough for the type of exposure these artist are developing for its interface. As an immediate public response, CEO of Spotify, Daniel Ek posted a long blog detailing varying perspectives about the business of online streaming.

Yet, Ronn Torossian still suggests the move taken by Taylor Swift was well made considering that she is, after all, a star. Her merchandising is greater than what the Spotify platform can offer her, and so far, her team has made very few decisions to compromise the achievements of this young star. Nevertheless, Spotify suggests that “it is the single biggest driver of growth in the music industry.” Team Taylor has apparently found better means of revenue and exposure. Interestingly, with TV and the internet booming today, the radio still holds the most yearly consumed hours of usage by an audience: these are real people of course.

What really makes the decision to depart from Spotify is simple: though it holds potential to give exposure and increase sells, the platform, as a business is shortchanging artists. For ad revenue shares, for example, Google Inc. has an osculating standard of roughly $3 to $5 for every 1,000 viewers who actually follow an add: not just show up on a page. On Spotify, the musicians, not ads, are directing Web-surfers to the site. Without them, Spotify doesn’t even have a reputation. Regardless, for 500,00 views, the platform will pay artist roughly $3,500, according to statement from CEO Daniel Ek: a statement that Swift’s team responded to as inflated. Additionally, Big Label CEO, Scott Borchetta, who first discovered Swift and signed her to his record label, says that the payoff from Vevo, a video hosting platform similar to YouTube, is much higher than what Swift and her associates will earn on Spotify. Hence, the move could consolidate Taylor Swift streaming to a platform where she’ll competitively earn more revenue.