Trinidad “Trini” Abraham opened up the Lexington Social, East Harlem’s wine and tapas bar in 2009 with his two brothers and business partners, Justino and Miguel Abraham. 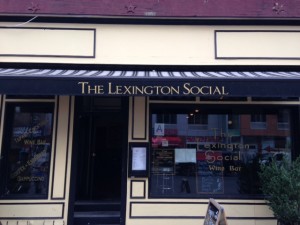 The outside of Lexington Social Wine Bar, on 103rd and Lexington Avenue.
The Lexington Social was the first “upscale” restaurant/wine bar to open up in the area, at the start of East Harlem’s gentrification emergence. Located on Lexington Avenue between East 103rd and 104th street, Lexington Social is home to Spanish Harlem’s largest variety of wines imported country and worldwide, with seasonal tapas served in a dimly lit, romantic setting. It’s 28 person seating gives it a charming and quaint atmosphere for a quiet night in uptown Manhattan. Smaller tables are arranged against the wall, and two communal tables are placed in the center of the restaurant, just feet away from its 10 foot wide bar with an open kitchen, and its large selection of hard liquors and beers on the wall. The walls are decorated with each type of wine they have available, a list so long it would take weeks to memorize. Lexington Harlem remains as Spanish Harlem’s only place to go for a relaxing atmosphere to enjoy exotic wines paired with delicious tapas

The Lexington Social thrives as one of Spanish Harlem’s most popular “must visit” locations according to several travel and lifestyle blogs.
http://gothamist.com/2013/08/12/a_food_drink_tour_of_spanish_harlem.php#photo-1
The patrons that frequent the cozy 28-seat wine bar are predominantly regulars to the bar, or locals in the area. 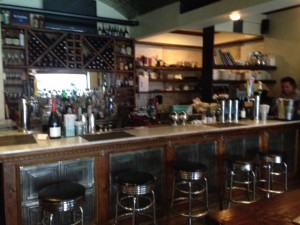 Trinidad Abrams, owner, stands on the side of the bar inside Lexington Social.

Abraham, who has lived in Spanish Harlem for his whole life, opened up Lexington Social in May of 2009 on Lexington Avenue between 103rd and 104th street, three blocks from the house he has lived in for almost two decades. Lexington Social’s grand opening elicited mixed reactions, as it was just one of the many sudden changes East Harlem saw in a short amount of time, in the midst of all the gentrification underway. At the same time many residents of Spanish Harlem were being evicted and displaced out of the neighborhood some have known as home their entire life, construction began on multi-million dollar condominiums. It was clear a whole new era was dawning on East Harlem. Just like the buildings and businesses, there is a clearly visible and transparent shift in the population because of gentrification too. Everyone sees it, no one denies it.

http://www.nytimes.com/2010/01/06/nyregion/06harlem.html?pagewanted=all&_r=0
This article was posted in the New York Times in 2010, reporting on the population shift as it was happening.

Abraham, pictured below, is of Mexican descent. “Just a few years ago, it was not like this. It was mostly Mexicans and Puerto Ricans, then the Blacks, then the Asians, and then the Whites. There were not a lot of White people at all, you never saw them uptown. Now it almost half Spanish and half White.” 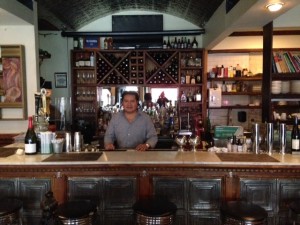 Trinidad Abrahams stands behind his bar in the Lexington Social.

Because it has become known that Spanish Harlem is now more popular of a location to live in, landlords and real estate agents are free to charge more for rent. This probably couldn’t have been able to happen five or more years ago, but they can now afford this option because If current tenants disagree with the spike in rent and choose to move out, Spanish Harlem has been such a “trendy” neighborhood on the up-and-up, that the current residents will be replaced with ease by new prospective apartment hunters eager to take their place.

http://streeteasy.com/area/east-harlem
Found in the article: “Once a strictly working class neighborhood, the area has recently seen a wave of young professionals and more affluent families who have been lured by affordable co-ops and amenity laden new condos, as well as quick access to the rest of Manhattan.”

Abraham believes the rising rent draws in one crowd, while at the same time pushing another out. Spanish Harlem borders one of the most expensive neighborhoods in Manhattan, the Upper East Side, so those living in the 80’s and 90’s streets are moving up at a lower cost, but still staying in a neighborhood they believe is popular while still relatively cheap. “The rent is too expensive now for the poor people living here, but it’s cheaper than the rent for people living in the 90 streets a few blocks away. The rent is higher for the people living here now, so they can’t live here anymore and are moving out. But the people living downtown are moving up because the rent is still cheaper for them.”

Abraham notes that the Lexington Social’s patrons are predominantly White, so gentrification better serves his business because it caters to the population that is moving in. His restaurant, as well as many, if not all businesses found in East Harlem is one of the first things afflicted by gentrification and what gentrification entails for the fate of the neighborhood.