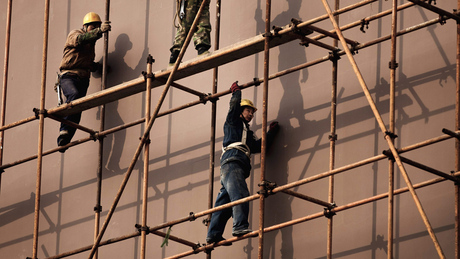 Two articles from Bloomberg Businessweek that cover the current state of China’s economy have interesting viewpoints. The Chinese economy, the second largest in the world, is slowing down. However, what is surprising many economists is the rate that it is decelerating. The first-quarter GDP growth of 7.7 percent was well below the 8 percent predicted by a Bloomberg survey of economists. This was even lower than the 7.8 percent rate for all of last year making it China’s slowest growth in 13 years.

KFC parent YUM! Brands (YUM), which gets around half of its revenue from China, says it expects this year’s profit to suffer a “mid-single digit” decline. That’s in part because the fast-food franchise has been hard hit by food safety scares in China, including the spread of bird flu, with sales at its 5,400 restaurants in China dropping by 24 percent in the first quarter.

The continued rise in worker salaries is an added motivation to move to a less labor-intensive and higher-value added economy. According to Roberts’ article, shifting from a reliance on exports and investment to an economy more driven by consumption and services is vital to China’s changing economy.

While China’s economy may slow to less than the 8-10 percent growth it normally averages, a real collapse, to growth rates of 2-3 percent or less is improbable. The Chinese economy is not going to melt down soon and, in fact, it might still grow much more strongly this year than most other countries in the world. Chinese companies alone occupied 73 of the top 500 slots in Fortune’s 2012 ranking of the largest companies in the world by sales.

Overall, China’s real economy remains strong, compared with nearly every other economy globally. The Conference Board, an independent economic forecasting organization, projects that China will grow around 7.5 percent in 2013. In fact, China’s forecasted growth is far higher than that of the average developing country, which is projected at 3.3 percent growth in 2013 and countries such as India and Brazil are projected to grow less than 5 percent.

To learn more about current conditions of the Asian countries in the context of global politics and economics, be sure to check out courses such as POL 33103 and 3346, taught by Professor Myung Koo Kang.