I’m there, running in circles with her children, sitting in the back of an old car, walking through a smelly bar, growing more anxious with every frame. I feel hopeless and poor, a wild dog dressed as a child. Andrea Arnold’s exclusive use of the handheld camera, mixed in with some steady cam shots, is incredibly effective when conveying the anxiety of a single mother’s dilemma and her four children’s plight in the short film “Wasp.” 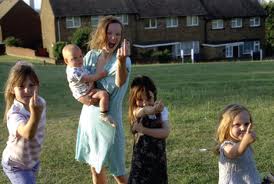 The film is incredibly easy to watch, but hard to sit through. Arnold takes the camera and shoots from the most awkward angles, to help create a sense of overwhelming claustrophobia in the film. In one scene Arnold traps us in the kitchen with desperation taking hold in the children’s eyes who stare at us with unrelenting hunger. Their mother scavenges for food and we join them on the floor and wait for moldy bread or flour.

The film also generates an incredible amount symbolism from otherwise meaningless imagery. Hand drawn paintings hang in the home after we see her lose a fight for them. She’s hungry and weak, but the love is there. On the car ride home a bag flies out the window symbolizing how we don’t appreciate things when we have them. The film is full of these strong images.

The fact that a movie can be this powerful with handhelds and on location shooting is wonderfully inspiring. Who needs two hours and a million dollar budget when something this powerful can be done with the so much care and attention to detail.

2 Responses to “Wasp” stings the heart