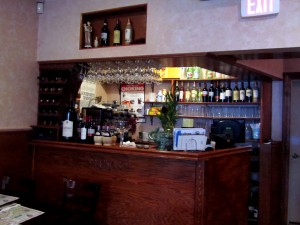 A row of wine bottles and upside down wine glasses stand solemnly on shelves behind the wooden counter, richly stained in a reddish tone. Polished hardwood floors and walls split into halves of wide, wooden panels and wallpaper decorated with vibrant paintings and framed, rectangular mirrors, encapsulate the quiet, unoccupied dining space.

It is only 11 a.m. on a Thursday. The restaurant has only just opened its doors for the day, and already, inside the kitchen, there are signs of bustling activity. Chef Maurizio and his assistants are hard at work, providing rich, flavorful catering for 200 students and their teachers from a nearby school. Italian songs drift softly in the background, drowning out the distressing sounds of clattering pots and pans. 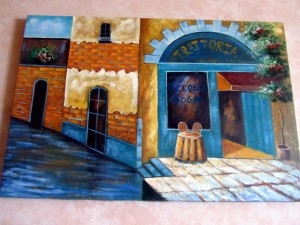 Each of its chairs, tables, and other interior furnishings, were meticulously selected— handpicked with love— by Chef Maurizio and his family only two years ago. For the family of three, Piccolo Sogno, which in Italian means ‘little dream,” is indeed a dream come true.

“This was always a dream of ours to have a restaurant. Obviously, it’s a small place so it’s a ‘little dream,’ but eventually, we have the big dream,” said Monia, the couple’s twenty-four-year-old daughter, with a laugh. “It’s very tough in Italy to open up a restaurant, and plus, we never really had the money.” Pensively, she added, “[My father’s] been cooking all his life— always worked under someone else— never had the opportunity to have our own restaurant, and finally, we did.” 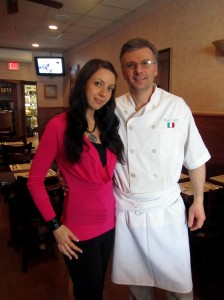 Chef Maurizio and his daughter, Monia

Vivacious and articulate, Monia, a brown-eyed, wavy-haired, slender brunette, is in charge of managing the restaurant’s finances, as well as waitressing, and cleaning. “Everybody does everything. When it comes to your own business, you have to know how to do everything— how to flip the pizzas, how to make something in the kitchen,” remarked Monia.

It is hard to imagine that Chef Maurizio and his family immigrated to the United States only a decade ago. Born and raised in Cunardo, a little town in northern Italy that sits by the border to Switzerland, Chef Maurizio recalls that he first developed an interest in cooking during his childhood years in his mother’s kitchen.

“I started when I was actually like 7 or 8 years old with my mom in the kitchen,” remarked Chef Maurizio. “My mom never liked to cook. Never. That’s why she was really surprised; my brother became a pastry chef – has a pastry shop in Torino, Italy— and I’m a chef.” With a smile, he added, “She, all the time, tells me you must pick it up from your grandma because I don’t like to cook. My grandma was a very, very good cook.”

Even during school breaks in his adolescent years, Chef Maurizio enjoyed learning in the kitchens, trailing after his older brother wherever he went. “Even though I was like 10 years old, [I would] go follow him in the big hotels just to stay on the side, sometimes just to break the nuts, whip the cream, or peel a potato— just to look at what the chefs were really doing,” remarked Chef Maurizio. “And then when I was old enough, I started culinary school in Stresa. It was the best culinary school in Europe a long time ago, in 1978.”

But for Chef Maurizio’s family, the little dream of Piccolo Sogno comes in a far bigger portion. Since the restaurant’s opening, providing customers with authentic and fresh tastes of home— Northern-Italian styled cuisine— has been their sole mission.

“We’re born and raised in Italy and so we know how Italians eat, and over here, they try to change the Italian food to be Americanized,” said Monia. “A lot of people think that the Italian food that’s here in America is Italian food, but if you go to Italy, it’s really a lot different; and that’s what we’re trying to bring here.”

According to Chef Maurizio, on average, the restaurant receives 150 to 200 customers a day on its busiest days of the week, Fridays and Saturdays. The restaurant uses only fresh ingredients from Italy and fresh fish is delivered to the restaurant daily.

“We were excited when the people that come over here from Italy say, ‘Maurizio, I went there and ate exactly the same plates that you make me over here,’” remarked Maurizio, with a wide grin.

“I’ve been in this country about ten years. My mind is still there.”

This entry was posted in Food. Bookmark the permalink.