Stuck in the ’80s and Not Trying to Get Out

I’ve said it before and I’ll say it again, I was born into the wrong generation. I’d choose a corny ’80s horror flick over the best CGI or special effects any given day, I don’t think anything could make less sense than paying hundreds of dollars to look like a hippie, and, most unfortunate to me, I could count the number of new mainstream music acts that even slightly arouse my interest on one hand.

I’m not the type to write off all things mainstream at all, I’m always happy to see a good musician gain a huge following when they deserve the attention. Problem is though, that’s just not the case now. People will swarm to buy $400+ tickets to see a washed up pop-star fumble around on stage or be carried and tossed around to the tune of synthesizers and computer-made vocals, but Social Distortion (get ready for some bias, they are my favorite), a well-known and consistently awesome punk band that’s been around forever, still plays small bars and venues, usually for no more than $30.

“Artists” like Ke$ha (it pained me to type that) are praised for their individuality and quirky fashion sense. Meanwhile, if she had come out about twenty years ago when sequined leather shorts and torn up band shirts could be your Sunday best, she wouldn’t automatically join the ranks of ’80s rock goddesses like Siouxsie Sioux, Joan Jett, and Lydia Lunch. She would just be another chick with a crappy voice trying to get attention. 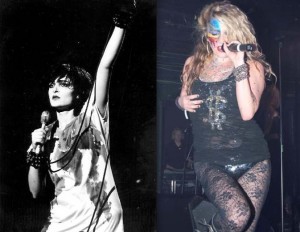 There's a big difference between thrash and trash

I’m not saying everything was better in the ’80s, obviously I wasn’t there and all I have are old records and other people’s memories. But hell, at least the crazy style and brave choices of musicians were great equalizers and allowed the best artists to shine through.