Fall of the Albatross: ‘Best Show Ever’ 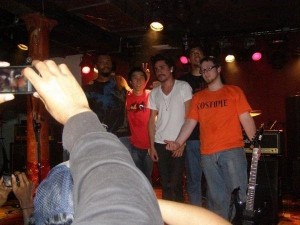 Tonight, the head rocking metal band had everyone’s head pumping, body parts flying, and energy soaring across the room. Fall of the Albatross (FOTA), a 5 man crew from Queens, all powered up their instruments and vocals and gave it their ‘best show ever.’

Before we get too far, let’s rewind back 2 days ago when the stress began. When they are not taking their finals, some of the crew members were helping to promote their newly released album, Entanglement. Guitarist Harold McCummings and Colin Ruhwedel along with their Vocalist Ray Hodge, were at Washington Square Park passing out flyers to promote their upcoming event for May 18th. Elsewhere, the other group members, Bassist Robert Anderson and Drummer Anthony Wong took out their baking tools, making free brownies for their show.

“Whewww, who knew baking brownies was harder than making music,” Anthony laughed. “I failed and decided to buy the store brand. What a life saver. Hey, brownie points for free brownies. ”

The band practiced all day on Tuesday.  Harold said, “I know it’s a disturbance but it’s a necessity…I know I’m good and we have done it many times…I just want to make sure I’m great.” 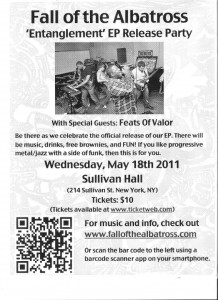 The group started in 2007 by chance. They began with nothing but a concept and with practice and preservation, the band continued to grow in fame. Their first show, from what a couple of the group members remembered, consisted of family members and friends in the audience.  Today, they have 659 followers on Facebook and 217 on Twitter and many metal-fantics.

Ray commented that their inspiration comes from all sort of genres and artists such as Dillinger Escape Plan and Between the Buried and Me to Earth Wind and Fire and Stevie Wonder. He continued to say, “This is what makes our band different. We blend a mix of different genres that you won’t think would go together but we did it!”

Entanglement is an eclectic blend of metal, funk, soul, jazz. “We’re all busy but that doesn’t stop us from performing. We released the album back in April…I couldn’t wait to perform the album… I’ve been dying for the day (May 18th) to come.”

The day has arrived. The performance started a little after 8pm at the famous Sullivan hall in Greenwich village. The line was short due to the pouring weather. Many who came were males in their late 20’s who eagerly rooted for FOTA as they came up on stage. The band kicked off the show with “Dulce de Leche.” The crowd went wild to Ray’s devilish voice. Lyrics spilled out in mumbo jumbo that made no sense but had a beat that reached out to a lot of people. The crowd was lost in the music, heads were flinging violently up and down and arms were flying in the air, at that point it got pretty scary to stay in the center of the dance floor.

Their next song, ‘The Silver Epic,’ took me by surprised, it was not your common angry music. It started with a funky and a smooth pop settling beat and seconds later it literally transitioned into what seemed like another song but wasn’t. Ray literally gave me a jump when his possessive demon voice emerged. It goes back and forth from funk and jazz to metal. Compared to their inspiration band, The Dillinger Escape Plan, FOTA strived in terms of guitarist skills and vocals. Their music had a creepy calmness like The Dillinger Escape Plan’s Farewell, Mona Lisa,” and a mix of raging vocals of another famous metal band Nile.

The night was a success. The band’s next biggest goal is to get recognized and signed. Colin commented, “I don’t think anyone can imagine that 5 college students could have pull something off like that…We’re new, we’re fresh,” and as corny as it might sound but he said it, “WE ARE… THE FALL OF THE ALBATROSS!”