Brilliance Walks Through The Halls of Baruch College 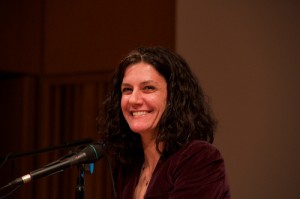 Le Blanc in a Conference

Walking now through the Halls of Baruch College and teaching at some of the school’s classrooms is the great writer Adrian Nicole Le Blanc. The author of the book “Random Family” which chronicles the lives of a family she followed for 10 years, has been this semester’s writer in residence, expanding and sharing her knowledge with some lucky students.

I had the privilege of attending her conference, despite the tiresome day I had. I was dreading the whole idea of attending a conference that would discuss a book I had not read, especially after such a hectic day. However, I put my responsibilities ahead of me and attended the conference and I have to admit I am glad I did. I left the conference feeling highly encouraged and grateful for the best advice she gave, “always have a plan A and behind that, have a plan B.”

Le Blanc started her writing career as an intern at Smith College and freelancing at the New York Times. I look forward to reading her book during my free time. Sometimes, putting our responsibilities first, even after stressful days, actually pays off. 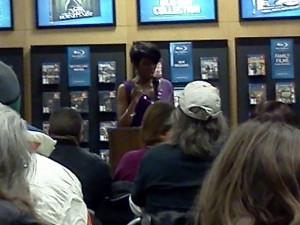 It was a pleasure being in the presence of a famous television journalist. Cheryl Wills, is a reporter for NY1 as well as a blogger for The Huffington Post. In her reading session earlier this afternoon, she discussed the sentimental values of her book, Die Free. The characters in her book mirrored the experience her great-great-great grandfather, Sandy Wills, who fought in the civil war. As she read, there was passion in her voice as she described the taste of freedom. Her hand gestures made the emotions come alive. The audience sat in silence, mesmerized by the details as she explained the whimpering cries of a slave.

Seats quickly filled up as soon as her voice echoed throughout the lower level of the bookstore and attracted many near-by book worms.

As an audience member at the author event on Tuesday evening, I was not anticipating the large welcome that greeted the author and guest lecturer, Adrian Nicole LaBlanc. She stood humble and tall at the podium, reciting brief and long passages from her well acclaimed debut novel, Random Family, a captivating tale about two couples and their true life story.

Despite, the two-hour long running time, the event was enriching and it gave students and attendants a more realistic capture of the LaBlanc’s thoughts, goals, and vision for her upcoming book which surrounds comedy. Overall, the event was fun-filled, and inspiring! 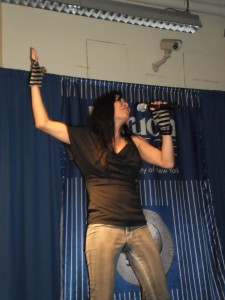 While my classmates were munching on baked goods and listening to this semester’s Harman Writer-in-Residence, Adrian Nicole LeBlanc, I was busy laying out table cloths and tea light candles in the multipurpose room.

As president of Writers’ Society, I was setting up the room for a performance by Def Poet, La Bruja. After a month of tedious logistics and paperwork, I was glad for the event to finally take place.

After some technical difficulties, La Bruja (which means witch in Spanish) took the stage gracing the audience with tracks from her latest two albums. Her style fuses elements from her Puerto Rican culture, humor, and socio-political messages. By the end of the night, she had everyone singing the hook to her parody of Rhianna’s “Umbrella”, entitled “Arroz con Habichuelas.”

Baruch Sits Down With Adrian LeBlanc

I was recently given the pleasure of attending a reading and conversation with Baruch’s Sidney Harman Writer-in-Residence, Adrian LeBlanc. LeBlanc is a nonfiction writer and is well-known for her first book, Random Family, which 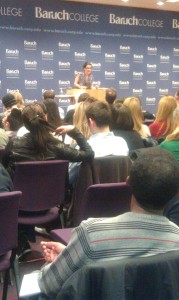 focuses on a family in the Bronx. During her reading, she described the family she followed for several years and it was clear how much she cared about them. I could see that her passion for telling their story is what made her literary depiction of their lives so realistic.

Aside from reading passages from Random Family, LeBlanc also shared some passages from the latest book she is working on, which is about stand up comedy. In the book, she talks about a comedian that goes from having a humiliating experience on stage, to putting on a great show and having the best time of his life. LeBlanc used the comedian’s experience to offer helpful advice to aspiring journalists. “I think failure is the best thing that can happen to you,” she said.

“This is a lucky business that lets you learn about the world,” Adriane Nicole LeBlanc shared to a room of aspiring journalists “I felt very at one with the world.” Leblanc was the source of infatuation of everyone in attendance to her reading at the Newman Library Conference Room on March 22nd. 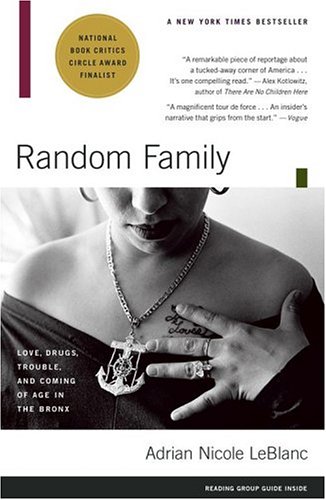 LeBlancs wittiness and humor towards the serious matters she addresses in her book, “Random Family: Love, Drugs, Trouble and Coming of Age in the Bronx,” helped keep the mood light and the crowd intrigued to find out about the lives of LeBlancs subjects within the book. The story follows the lives of two young girls named Jessica and Coco and documents their trials and tribulations of growing up in the ghetto. Leblanc described it as a “chronicle of extended family living in poverty, but in my heart of hearts, it’s a love story.”

LeBlanc provided insightful advice continuously to the young crowd. She described journalism as a long apprenticeship. She insisted that it takes a long time for every journalist to find their voice. “The world is coming in through you. I used to say, in order to receive more of the world, you have to take yourself out of it, but now, I feel you have to do an inventory of yourself first.” LeBlanc serves as an inspiration for young writers everywhere. She shows that you can successfully execute having an opinion about the world around you, no matter how long it takes for you to get there.

A Reading of Writing 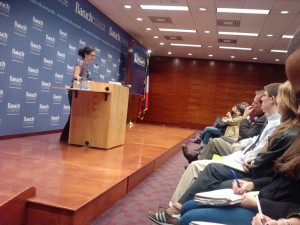 The majority of writers want their writing to be concurrent with their enthusiasm for the subject. Baruch’s spring 2011 Harman Writer-In-Residence Adrian Nicole LeBlanc holds a different opinion. “I want to get to the point where what once excited me ceases to interest me,” LeBlanc expressed during A Reading and Conversation yesterday evening in front of an ample audience. The excerpts she read from her applauded book, “Random Family: Love, Drugs, Trouble, and Coming of Age in the Bronx,” were overshadowed by her unique views on what one writes about, the approach to writing and how it is written.

I have to admit, I usually only attend events at Baruch when a professor mandates it. I’ve often let my enthusiasm for pursuing my love of literature and classic journalism be discouraged by the school’s emphasis on business.  After last night, though, I’m a changed woman. I’ve never felt more proud to be a member of my school’s (that’s right, my school) liberal arts department and a part of such a passionate group of people who I had the pleasure of mingling with for the first time in far too long.

Adrian Nicole Leblanc, this semester’s Harmon Writer-in-Residence, spoke volumes about herself in the first few seconds of her conversation with the crowd of faculty, fans, and budding journalists and writers who attended her reading and conversation.

After a praising introduction by Baruch’s own Christopher Hallowell and Roslyn Bernstein, who charmingly played on the school’s slogan “Baruch Means Business” by presenting a beautiful “twaiku” dedicated to the unsung heros of the liberal arts, Leblanc humbly thanked them for the sentiments and admitted that she feels the praise is often misplaced and doesn’t know how to respond to those who compliment her so generously. Her expressions and her words immediately won me over. The two hours I dreaded sitting through flew by and I was left wishing there were more time to hear her speak and to enjoy her rapport with the crowd that she seemed so grateful to be standing before.

Unfortunately, I’ve only read excerpts of her book Random Family, but if I needed any push to read it in its entirety, meeting her would have done the trick. After listening intently to her journalistic process and the depth of her involvement and dedication to her subjects, I took the time (and missed my bus) to thank Leblanc (to her surprise, which I found all the more respectable) for inspring me to follow through with my goals, and I’d do the same a thousand times.

A Little Humor in Drama 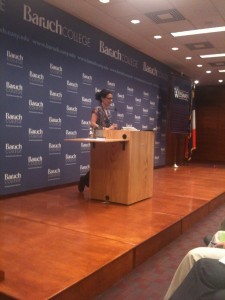 In the large conference room of Baruch, Novel Writer Adrianne LeBlanc engaged the large audience with her heart felt stories and a weird twist of humor. Slouched slightly against the podium, LeBlanc began reading excerpts from her novel, “Random Family.”

She spoke with a slight, delicate and nervous tone on her experiences and travels. “Take 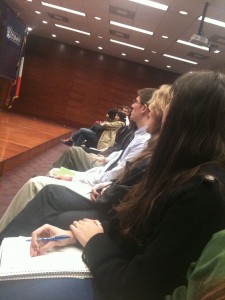 yourself out of the way to let the world in,” she said about reporting and studying people for her book. Despite her interesting perspectives and beliefs, she seemed to have lost some as she began to answer questions digging more into her experiences. Her long responses and constant pauses left the Q&A session kind of “dry,” but nonetheless it didn’t take away from descriptive reading and down to earth personality. 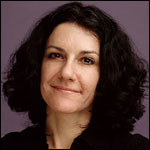 Yesterday Adrian Nicole LeBlanc, this semester’s Harman writer-in-residence, imparted her literary knowledge as well as the    techniques she utilized while writing her novel Random Family.

She spoke how she followed the book’s main characters, Coco and Jessica, for ten years while chronicling their struggles in a less than stellar drug-infested Bronx neighborhood. The audience, consisting of Weissman students, listened to passages that visually painted a picture of the character’s appearance and life struggles. “I felt like knew Coco,” said David Ospino concerning her mastery of words as they relate to character descriptions.

A seasoned journalist who has also worked for Seventeen Magazine, LeBlanc explained how the novel stemmed for assignments she had for the magazine.  The event ended with LeBlanc taking questions from the crowd, a time when students got a better understanding of her personality.