Alias Restaurant Behind the Red Walls

Clinton Street in the Lower East Side tends to be a little scary at first glance, due to the unnecessary clutter of four nail salons and two beauty parlors at the head of the block, but once you get to the corner of Rivington Street, you’ll hit Alias, one of the infamous restaurants located on Clinton. 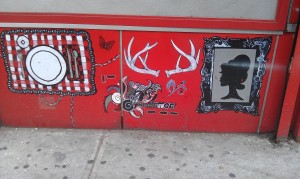 While NYC & Company’s Annual Report showed that there were 23,499 active restaurants in New York City in the past year, few of those restaurants are as eye-catching as Alias. The bright red walls on the restaurant’s exterior were painted by Emily Noelle Lambert and her Foundation students from Parsons The New School for Design as their class’s final assignment. The animals, people, figures and shapes featured on the walls have customers curious and enticed before even entering the restaurant.

After almost ten years, Alias has become extremely involved in its community. It has raised money for several organizations, including the Unicef Tapwater Project and the Grand Street Settlement, but most recently, the restaurant hosted its Annual Charity Eggnite Eggstravaganza. The event included egg painting competitions with prizes, free food and free drinks. The proceeds this year were donated to Mark DeGarmo & Dancers’ programs in literacy, dance and creativity in local LES schools. 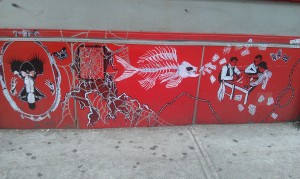 “We definitely support all schools and local charities,” says owner Janet Nelson, who is also a Lower East Side resident. “I think every business owner should definitely be involved in the neighborhood and supporting it, especially since I’m also a neighbor.”

Nelson has had plenty of experience in the business after owning several restaurants, including 71 Clinton Fresh Food, but it took a lot of hard work to get to where she is today. “I started at the very bottom, which is the way a lot of people start in the business,” she says. “I was a buffer, then a waiter and then I went to doing office work and financial work. There was never cooking for me. I never made it into the kitchen, except to wash dishes.”

While Nelson is extremely dedicated to Alias, she accredits much of the restaurant’s success to her staff and the other owners, one of which is her sister, Marybeth Nelson. “We’re a small restaurant, but the people who own it and run it, we’re all a family,” says Nelson.

Customers agree that a large part of the restaurant’s appeal is the environment created by its staff. They are not the typical behind-the-counter staff that serves you your food and disappears until it’s time to bring you the check. They are friendly and attentive to the needs of their customers. “They always walk around and converse with people,” says Sunita Lofters, frequent customer and owner of Sunita Bar in the Lower East Side. “It’s important as an owner to have that connection with your customers. The more they get to know you, the more they want to come back.”

To show its appreciation to the community that has made it so popular, Alias now offers a 10% discount to customers who live or work in the area. Aside from the discount, residents are drawn to the restaurant because of its unique menu. 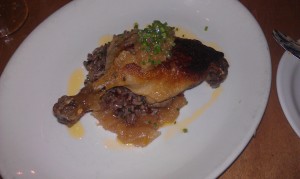 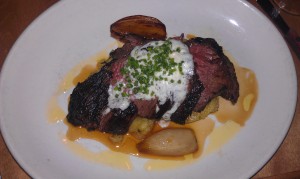 The Duck Leg Confit was the appetizer that appealed to me the most, despite ordinarily being a chicken and turkey eater. The duck, which was slightly crispy on the outside, but soft on the inside, had a wonderful texture and easily fell apart in my mouth. It was served with dirty rice, caramelized onion and apple chutney, giving it a sweet and tangy taste.

The Seared Hanger Steak entrée was prepared with blue cheese butter, sherry glazed onions and olive oil crushed potatoes. The blue cheese provided a delicious kick, but wasn’t so overpowering that you lost the flavor of the meat, which was tender and perfectly cooked. 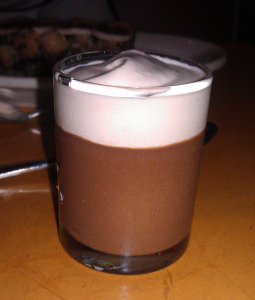 The desserts are all exquisite, but the infamous Chocolate Guinness Goodness is a staff favorite. The chocolate mousse is topped with a Guinness-flavored cream and the bitter addition is a refreshing change from the traditionally too sweet chocolate mousse.

With such a distinctive menu, it’s no surprise that the restaurant is a favorite in the Lower East Side, but with dishes that change seasonally, how do they ensure each one will “step up to the plate?” Nelson insists their secret is in the ingredients.

“We try to use local ingredients,” she says. “We go to the Farmers Market and use a lot of fresh and organic foods. We’re also part of the Slow Food Movement now.”  In the spring and summer, the menu changes more frequently, due to the exciting produce that emerges during these seasons. As the warm weather approaches, Nelson recommends that customers try her favorite dish, the Asparagus soup. “The soup is for spring and it’s fresh.”