What messages, ultimately, does this film offer about the Troubles? Does it, like Cal and The Crying Game, reject politics in favor of domestic retreat? Does it take sides or value one stance above another? What would you say is its “moral?”

While this film takes place entirely in Norther Ireland, it deploys tropes and stereotypes of other portions of the world. What regions are referenced, and how do these depictions map onto the local political calculus?

We’ve seen infantilized and emasculated characters throughout our discussion of films about the North of Ireland. How does the construction of Dan Starkey conform to or complicate such depictions? What other performances of masculinity and femininity to we see, and how do they align with character’s power and/or political convictions?

I’m posting three questions and will award everyone who responds with up to 5 points per question. You can earn points for multiple replies engaging with your peers as well as for a meaty effort to answer the question. The opportunity to post for extra credit will stretch until Sunday evening.

Apologies again for keeping class so far past our end time! I wanted to get ultimately to the question of the ideological implications of the film’s depiction of an atavistic IRA and what I was calling its “gynophobic economy of desire” (a term I borrow from Susan Stanford Friedman). While the film throughout shows the multiplicity of disguises and masks available as tools or weapons to characters in disempowered positions, I would argue that it ultimately doubles down on fixed characteristics (what’s “in your nature”) that lie beneath such performativity. In this move it casts both gender and politics as both enabling fictions and irresolvable truths, a contradictory, pessimistic, and ultimately passive stance to take. 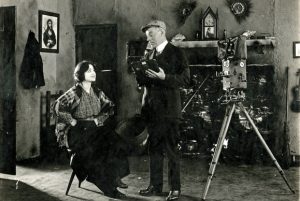 Please email Prof. McGlynn (maryDOTmcglynn@baruchDOTcunyDOTedu) if you are having trouble being added to the blog.