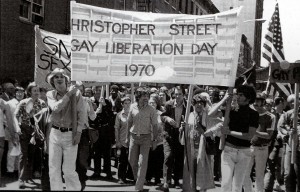 The idea for a gay community march started in 1970 with the Christopher Street Gay Liberation Day March. On the first year anniversary of the riots, the march formed to show support and again bring awareness. The community did a 360 with their approach, now showing a peaceful side to counteract what society thought of this community. The march started at 53 Christopher Street and continued up Fifth Avenue to end in Central Park. The march started with only a few hundred people at the Stonewall Inn and ended with several thousand by the time it finished in Central Park. The people that joined in showed the city the unification and support that this big minority had. The societal norm was to think that the gay community was a small section that could be eradicated. The purpose of the march was to build a safe community for homosexuals and to come together for equal rights. The years following this, the parade continued to symbolized something important to the gay and lesbian community.