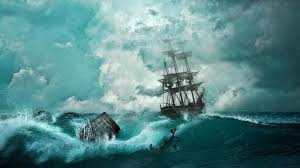 The first fiction adventure story existed thousands of years ago. The first story was Homer’s “Odyssey.” The story was about the central hero, Odysseus, who spends 10 years trying to get home to find his wife, Penelope. On the way to Ithaca, he encounters all manner of people, perils and monsters.

The rise of adventure novels

The blossoming of adventure novels is in Europe between 1700s and 1800s with writers such as Sir Walter Scott and Victor Hugo. The most famous writer in the era is Frenchman Jules Verne. His novels, such as “Twenty Thousand Leagues Under the Sea,” “A Journey to the Center of the Earth” and “Around the World in Eighty Days” have inspired countless movies.

-The story mainly describes the battles between martial arts gangs, the grievances between people, and the chivalrous spirit. The historical background of wuxia novels is mostly ancient China, especially the chaotic times of changing dynasties, so the times create heroes. In troubled times, people need more force to prove their worth.

-Thriller is based on detectives, mysterious events, intricate psychopaths or crime stories, and often combines some of the characteristics of detective reasoning, which makes the audience feel a shuddering sense of suspense.

-A type of story that describes a person or a group of people that wants to rescue someone or something that is very important. Usually it’s saving the people who are most important to the protagonist or protecting the world.

The purpose of the adventure novel is to create a pulse-pounding, adrenaline-pumping storyline and allow the adventure in the story to spark curiosity and a love of exploring something new in mind, and most of all, to enjoy the adventure. A good adventure story has the ability to draw us into a world we might otherwise never explore.

In the current society, they make video games based on novels to interest people. The biggest advantages of a book being made into a video game is seeing the characters come alive and give your imagination a sense of reality. A lot of people cannot imagine and picture the characters or situations when reading a book, but a film makes all that very simple. The other advantage of video games is that reading books is not a hobby that everyone has, in fact, there are a lot of people who simply cannot read, but they enjoy playing video games, especially kids. Books sometimes also have a language barrier.

It mainly tells the story of the Greek hero Odysseus returning home after the fall of Troy. After the end of the ten-year Trojan War, Odysseus wandered for another ten years before returning to his hometown of Ithaca. He is thought to be dead, and his wife Penelope and son Telemachus must face a group of wanton suitors who compete with each other to marry Penelope.

Gulliver is a surgeon and sea captain who visits remote regions of the world, and it describes four adventures. In the first one, Gulliver is the only survivor of a shipwreck, and he swims to Lilliput, where he is tied up by people who are less than 6 inches (15 cm) tall.

3) “Treasure Island”
The main character, young Jim Hawkins, helps his parents run the Admiral Benbow, an inn near Bristol, England. One day he finds a treasure map, and the three decide to mount an expedition to Skeleton Island to find the hidden riches. The following up is a rip-roaring tale of mutiny, treachery, swordfights, and murder.

4) “King Solomon’s Mines”
An elephant hunter and explorer, and his adventures in the company of Danish man of action Sir Henry Curtis and Royal Navy officer Captain Good. Sir Henry Curtis hires Quatermain to use his knowledge of Africa and his skills as a hunter to lead an expedition in search of Sir Henry’s lost brother, George Neville.

5) “The Adventures of Huckleberry Finn”

The novel begins in the fictional St. Petersburg, Missouri, circa 1835 to 1845, when Huckleberry Finn and his friend Tom Sawyer acquire an earlier adventure in which Indian Joe hides in a cave. pen belongings. Huck recounts what happened afterward in the first person. At first he was placed and lived under the tutelage of the widow Douglas and the stern Miss Huashan – teaching him to live a “civilized” life.