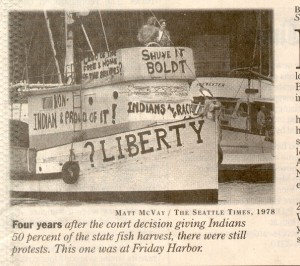 The 1960’s and 1970’s were a time of radical movements brought upon by various groups who were tired of being oppressed because of the current ideology of America. The groups were mainly minorities who had no voice in the government and could only be heard after years of struggles. The Native Americans were one set of individuals that had their entire lives disrupted because of the Americans. They were forgotten about when the U.S. no longer saw them as a threat and were forced to integrate into American’s way of life, slowly giving up whatever culture they had left had. A Hopi Indian named Sun Chief said
“I had learned many English words and could recite part of the Ten Commandments. I knew how to sleep on a bed, pray to Jesus, comb my hair, eat with a knife and fork, and use a toilet. … I had also learned that a person thinks with his head instead of his heart.”
However, even though many were forced to live the American’s way of life, the Natives never forgot their own heritage. They were constantly reminded of how Americans took away everything and violated as Americans went back on promises they made. “The United States government had signed more than 400 treaties with Indians and violated every single one. ” In 1968, fishing rights that had once been granted to the Natives, were taken away because Americans wanted it exclusively. The Indians staged protests to get their voices heard but the government paid no attention. It wasn’t until many fights and protests later that the two groups finally reached an agreement. Zinn includes this particular group because they represent a continuous struggle of a population that did not give up. Over the course of hundreds of years, the Natives did not forgot their own culture and succumb to their new environment. Their movement contributed to the changing of traditional America because it forced people to acknowledge Native Americans as part of their society while allowing them to still keep their own traditions.

The movement for “unquestioned ways of living” was important for everyone who was considered to be different from the standards American society had set. This movement was brought on by new generations who were opening up to a new way of progressive thinking unlike the older generations that had been strictly conditioned on what to think. For example, “Homosexuality was no longer concealed. “Gay” men and “gay” women- lesbians-organized to combat discrimination against them, to give themselves a sense of community, to overcome shame and isolation.” The LGBT group was acknowledged and for the first time, they weren’t thought to be mentally ill. Books of a sexual nature, once forbidden, became available and slowly movies started including sexual scenes. There was no longer such rigid distinction between sexes as women were not confined at home. They were able to get jobs and wear pants while men didn’t have so much pressure to appear so manly all the time. Media and the arts was a huge catalyst behind the changes. “Bob Dylan and Joan Baez, [sang] not only protest songs, but songs reflecting the new abandon, the new culture, became popular idols.” With this kind of reinforcement, the new ideology was accepted and people were freer to be who they were. In return they were able to be more open to who others were too, even if they weren’t the same race, class, gender, etc. Without these progressive changes, America wouldn’t be the country it is today but the struggle for equality is still a never ending battle.