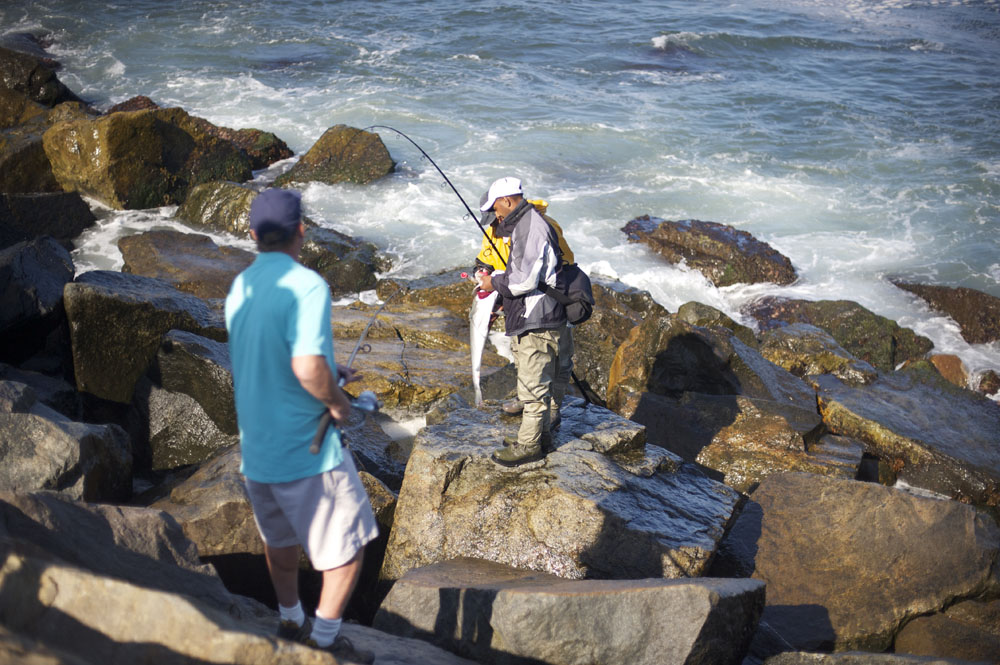 The seasonal Fall striped bass blitzes provide New York City fishermen who feel trapped in the big city an outlet to escape and share their passion with people from all walks of life.

Fishing in Long Island, N.Y. has become the subject of curiosity for many in the Tri State area and all over the world. The Striped Bass blitzes happen every Fall, and people have developed the passion for this type of seasonal fishing. It has become a lifestyle that many fishermen know and love. Defined by stripersonline.com, in it’s proper context, a blitz describes many anglers taking many fish on many different lures over a wide area. New York City is one of the biggest metropolises in the world, and some big city residents feel like ‘fish out of water’ without a regular fishing routine. There are many types of anglers, including recreational, serious sport fishermen, and those who are involved in the commercial sector. Traveling is not always an option for fishing trips, and a large number of NYC anglers turn to Long Island to satisfy their craving. Fall’s quest usually includes landing a striped bass.
The interviews and footage in this piece were taken before Hurricane Sandy hit in late October of 2012. The fishing opportunities were dramatically reduced due to the pollution in the water and the damage to the marine community. The chemical runoff in the water made the fish inedible, and the damage to docks and boats in the area seriously hindered many fishermen’s ability to get out on the water at the end of October and throughout November.
Every striper season, many fishermen gather at the Lighthouse on Montauk to compete in the Montauk Surf Classic Fishing Tournament. This year, the tournament was held during the weekend of September 22nd, 2012. In 1st place was Allen Vollmer with his striped bass weighing in at 43.60lbs. For more information, please visit the Montauk Surfmasters website: http://www.montauksurfmasters.com/2012/09/the-fishermans-montauk-fall-classic-2012-results/
Hundreds of participants from NYC and beyond fish for an entire weekend off the slippery rocks and in the crashing surf against the coast of the island. It is a dangerous sport, but professional fishermen and amateurs alike participate in the mission nonetheless. Miguel Rios is an extreme angler from Brooklyn, New York who is known as a “wetsuiter”. This term comes from the wetsuits and gear that they wear in order to better enable their chances for getting the best casts when the blitzes come close to shore. Mr. Rios explains his gear during the Montauk Surf Classic 2012,

“I’ve been fishing for about 13 years. We have special reels that can get submerged underwater, so no water can get inside of them. They’re all sealed. The rods are all custom made. We have special spikes on the boots, so we don’t slip off the rocks.”

Other fishermen are more traditional in their approach to surf casting for striped bass. Pat Ammarati is a New York fisherman in the 2012 Surf Classic who finds joy in using the time-tested gear and methods that he has developed over his lifetime. He uses traditional waders as opposed to the more modern wetsuits. Mr. Ammarati said that he won the Montauk Surf Classic tournament in 2010.

“The lighter the better for walking and carrying it all because it becomes really tiresome especially when you’ve got those boots with the waders, and then, you know, age factors into that. I’m not saying I’m old, but…”

Both kinds of fishermen use lights attached to their hats when fishing at night. Night fishing is a safety issue for everyone on the rocks at the lighthouse. Mr. Ammarati shares his experience,

“Yeah, then we have a nice hat with a light, usually for the night time because it gets pretty dark, you know, could be real dark, with no moon especially.”

Every day in the Autumn months, anglers will frequent many tackle and bait shops. During the Fall season, much focus is geared toward the striped bass of Long Island. Fishermen often attempt new methods, trying different kinds of rigs, poppers, and spoons. The mission can become quite expensive without the right experience and advice.
With eels, jigs, bunker, and clam bellies many surf casters stand on the beach or the rocks trying to pull these fish out. Others take boats out and chase the striper blitzes on their fish finders. Boaters follow the flocks of birds that dive into the schools of fish, casting their lines into the blitz and hoping to get a bite. Professional charter captains guide their clients to the best fish. Recreational fishermen strive to find the best captains, and tend to maintain relationships with the captains who give them the best results. Green on the vine, beginners pick the brains of local fishermen and bait shop owners. Ken Morse is the owner of Tight Lines Bait and Tackle in Sag Harbor, New York.

“I became involved in the fishing industry relative to my passion as a young kid. I got involved in this sport probably when I was about 2 or 3 years old living out here, growing up as a kid out here and just loved fishing as soon as it was introduced to me.”

Mr. Morse does business with all types of fishermen. He sells tackle, bait, and gives advice to recreational, serious sport fishermen, and commercial fishermen. Making his living in the fishing industry gives him a diverse perspective on the differences between the kinds of fishermen there are, but also a close understanding of the passion they all share.

“I have a lot of high end clientele, and I have probably equally if not as many just regular, regular people, if not, you know, landscapers and/or any profession you can imagine.”

Fellow fishermen sometimes share advice with each other while they are taking about fishing. Anglers hungry for knowledge will discuss tips, tricks, and rigs. If they feel that new methods are useful, they proceed to the tackle shop to pick up new gear. During the Fall season, many NYC residents head out to use their acquired knowledge to chase the striped bass blitzes in Long Island, New York. Whether the angler is purely recreational, a serious sportsman, or a commercial fisherman, they all share the same passion when it comes to fishing and the escape it can provide from big city life.