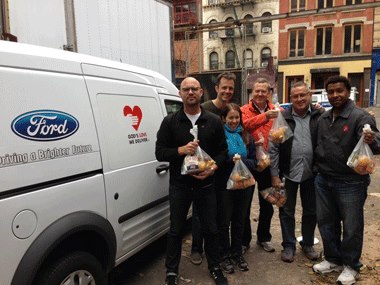 New York – During the predawn hours of November 3 – just a few hours after God’s Love We Deliver headquarters’ lights flickered on in downtown Manhattan – dedicated volunteers and staff put on their hair-nets and flipped the switch in the cafeteria sized kitchen, activating emergency response mode and sending 4,500 meals out the door en route to the Sandy ravaged areas throughout the five boroughs before the doors closed that day. 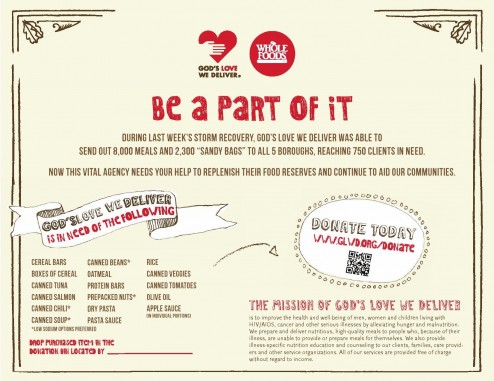 In the five days preceding, food vendors – including their own – were unable to deliver, while the threat of a rapidly perishing food supply was a grim reality for much of the region; at least in towns where supermarkets survived. Newly enforced passenger restrictions on the bridges and the limiting gas situation that was growing more dismal by the day were major obstacles in getting anyone’s logistics functioning, let alone those of GLWD.

“Without power, it was like this really eerie sort of ghost town… but people were making every effort to get to our darkened building, to work in the dark, and get out the food,” GLWD Communications coordinator, Em Findley reflected.

In the days of darkness that followed the storm, as weariness took the place of shock for the displaced, a small group of GLWD staff and volunteers gained access to the powerless SOHO kitchen and its supply of non-perishables to create ‘Sandy bags.’ While on a mission to take care of their own, they realized that their own was all New Yorkers who were now devastated and in need. They delivered over 2,300 of these emergency meal kits to shelters which included St. John’s Hospital where displaced Staten Island evacuees took refuge. Along with the kits, 8,000 prepared meals went out to the shelters that week.

In an effort to communicate and reorganize, the organization’s computer server was transported to a staff member’s house in Queens that, luckily, maintained its power supply. A plan of action to create new delivery routes was created by the distribution manager, Pat Costello. In an expedited effort, the Department of Transportation granted GLWD vans a permit to bypass the passenger restriction rule.

With communication becoming viable again, the organization’s website and Facebook were subsequently able to be updated as well. The influx of concern and offerings by local volunteers to get out there in response was plentiful on theirs site’s posts and blog. Volunteers emailed each other to surmise a plan of action.

“There was just no way we were not going to respond,” volunteer veteran Norma Grant said.

But while their hearts were filled with generosity, GLWD’s food supply was becoming depleted.

The only plan of action was to put out a rescue call to Whole Foods, who had come through for them in the past. The stores throughout the city responded in actively replenishing the supply, incorporating the donations from an organized list of provision requests which customers would donate as best they could.

Architectural Digest and Stonehenge, a NYC based Nut Company, made large contributions in an effort to re-build the supply.

A week following the storm, the organization was pushed harder in their preparations for a potential snow storm, which would usurp resources further. In preparation for delivery interruption, an emergency food kit was prepared and distributed to clients, much like the back-up ‘blizzard boxes’ that are provided in the winter.

GLWD is extremely dependent on its fundraising which was being stretched thin in their efforts to reach out to aid in recovery. Their biggest fundraising event is a 4 mile run called “Race to Deliver,” which takes place in Central Park in November. It is also known as a qualifying race for New York City’s Road Runners.

This year’s 19th annual race became a combined relief effort in a mission to provide meals for their clients as well as the displaced (and in some cases both) and it was dubbed “Race to Recover.” The event garnered a record number of runners this year.

Karen Pearl, the CEO of GLWD responded to the overwhelming response from volunteers: “On behalf of thousands of vulnerable New Yorkers at risk for hunger during Hurricane Sandy, thank you. Once again, the God’s Love community has shown incredible leadership, and affirmed this organization’s role as an essential food resource and emergency provider for our amazing city.”

On a normal day of operations, the assembly line in the kitchen in the basement is usually bustling before sunrise with streamlined preparations. The nutritionally tailored meals then get packed out for both foot and van delivery to residents of the five boroughs and North Jersey who are afflicted with serious illnesses and unable to prepare meals without great difficulty.

But on this morning, weeks after the storm, the kitchen broke into song as they stayed a little longer after the usual assembly, happily packing out hot burgers and greens for the Rockaways on the last truck out, singing “Rock – Rock – Rock – Rockawaaaay Beach…We can hitch a ride to Rockaway Beach!”
<

One thought on “Volunteers Rise Above and Beyond in Disaster Response”