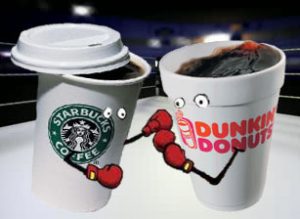 All coffee lovers should be familiar with the two most popular coffee shops: Starbucks and Dunkin Donuts. But which one is better? Which one is your go to? When you think of grabbing your morning coffee do you think about Starbucks or Dunkin Donuts? There are many factors that help you make this decisions. Factors such as food options, drink options, prices, apps, and atmosphere. Dunkin Donuts has over 3,100 stores in over thirty countries including China, Russia, Spain, Brazil, Chile, and Canada. They have 8,500 stores throughout forty one states in the United States. This leads to a grand total of over 11,600 stores around the world. Starbucks has 14,600 stores in the United States and 14,718 stores outside the united states. They have stores in sixty three countries including Canada, China, Mexico, Thailand, France, Germany, and Turkey. This shows that both brands are very popular. They both have thousands of locations all around the world. But which one is better? 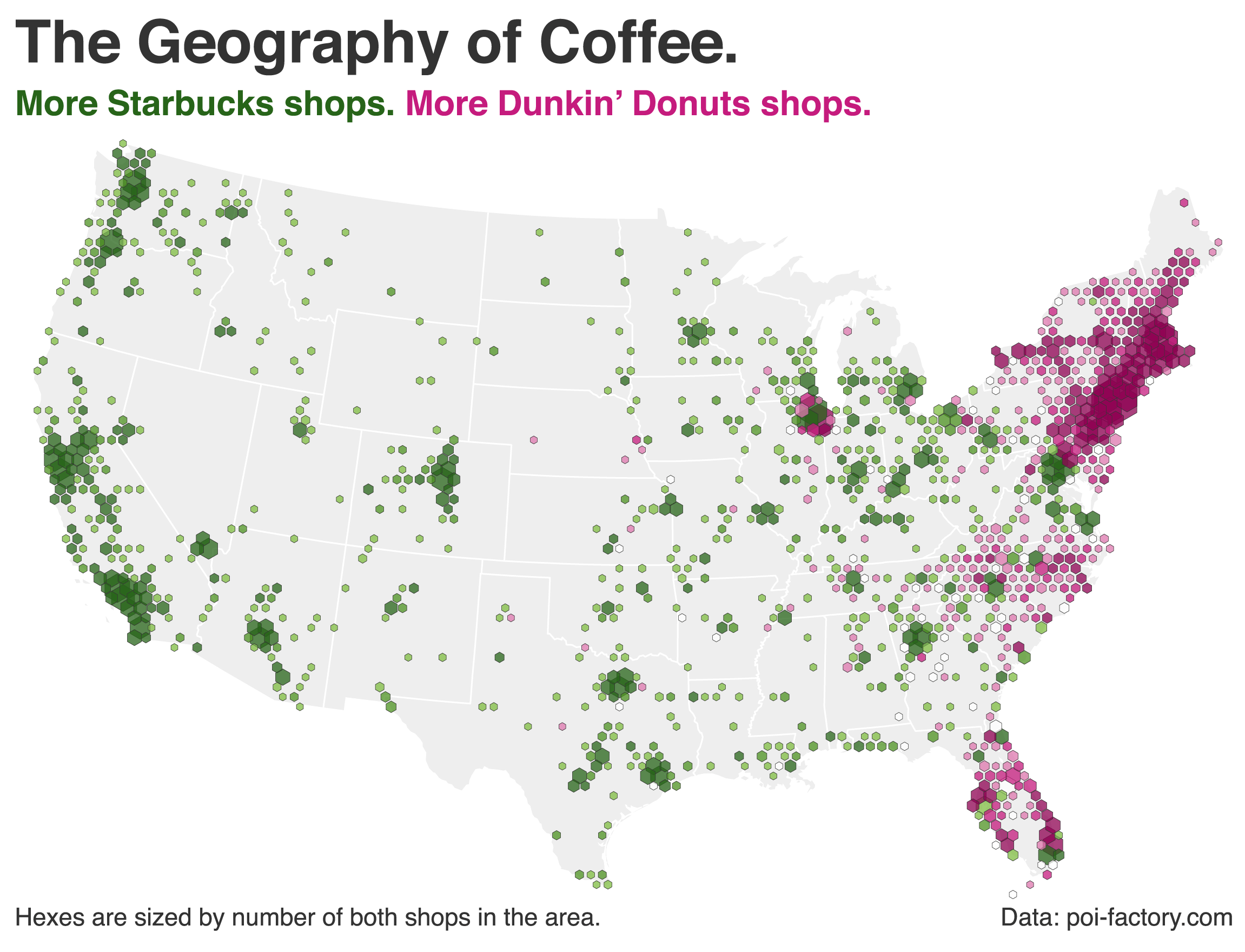 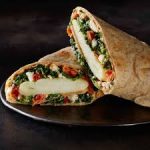 Starbucks and Dunkin Donuts menu options are very different. Starbucks offers foods such as scones, muffins, bagels, a variety of breads and sandwiches. Starbucks also sells items such as bistro boxes which are prepared boxes that you buy for lunch which typically include a sandwich, some vegetables to snack on and some sort of small dessert. They also carry other dessert items such as cookies, cake pops, and tarts. Starbucks also offers a health menu. They offer a reduced fat turkey bacon sandwich with egg whites, oatmeal, spinach and feta wraps, and a gluten free breakfast sandwich. Pictured on the right is the spinach and feta wrap. Although it looks appetizing, I promise you it isn’t. Unless you are vegetarian. Starbucks also likes to please their buyers so they add seasonal holiday items. For the winter holidays, Starbucks also adds food items such as turkey and stuffing panini, carved ham and egg sandwiches, pistachio honey croissants, gingerbread loaves, penguin cake pops and snowman cookies. For easter they add a duck shaped cake cop and for valentines day they add a heart shaped cake pop. 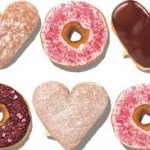 Dunkin donuts on the other hand has bagels, muffins , croissants, bagels, sandwiches, hash browns and wraps. The big difference between Starbucks and Dunkin Donuts is that Dunkin Donuts has items such as donuts and munchkins which are very popular. Donuts come in flavors such as chocolate frosted, chocolate glazed, vanilla frosted, boston kreme, glazed and many more. Munchkins usually come in glazed, glazed chocolate, powdered sugar, and jelly. Dunkin also has a health menu. They have oatmeal, multigrain bagels, turkey sausage sandwiches, egg and cheese sandwiches, and a veggie egg white sandwich. For the winter holidays they add items such as Santa donuts, Hershey kiss donuts, and cinnamon cream cheese. For valentines day they made heart shaped donuts as shown in the picture. For easter, a peeps flavored donut. For the fall time they offer a maple cream cheese spread, apple donuts, and a belgian waffle sandwich. For halloween they created a donut with a munchkin in the middle to make it look like a spider. Overall, they both have various sandwiches and desserts. Choosing which option to buy food from depends what price you are willing to pay and what you are in the mood for. 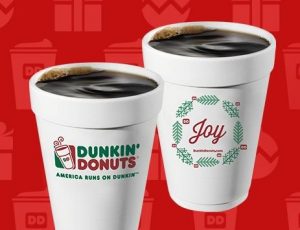 Dunkin donuts coffee options include americano, latte, macchiato, cappuccino, espresso and cold brew. Coolattas are the perfect drink to grab on a hot summer day. It is a blend of coffee (or fruit juice depending on the order), ice, and flavor syrup. Flavors include caramel, mocha, raspberry, blueberry and coconut. For the holidays, Dunkin add special menu items. For Easter they added a Peeps marshmallow flavored coffee. For St. Patrick days they added an Irish Creme coffee and espresso to their menu. For the winter holidays they add a peppermint mocha hot chocolate, and almond joy coffee. Dunkin donuts also changes their cups to say “joy”along with pictures of some christmas trees. For the fall time they offer pumpkin spiced coffee and lattes, maple flavored coffees and pecan flavored coffees.

Starbucks, however, sells their drinks in sizes such as tall, grande and venti. This came about when the Starbucks founder, Howard Schultz, took a trip to Italy and decided to name the sizes in Italian. Starbucks offers a variety of drinks such as lattes, hot and iced teas, lemonade, hot chocolate a variety of hot and iced coffees, and their famous frappuccinos and refreshers. Their coffees include cappuccino, americano, latte, macchiato, and espresso. Frappuccinos are the trademark of Starbucks. It is coffee mixed with flavors and ice and other ingredients depending on which frappucino you get. They popular ones are caramel, mocha, chocolate chip, and vanilla bean. A Starbucks refresher is a beverage made with fruit juice, ice and a light amount of coffee. Popular flavors include berry hibiscus, strawberry acai, mango dragonfruit and my favorite the pink drink. The pink drink is passion fruit juice mixed with coconut milk, acai juice, and topped with strawberries. Starbucks also adds additional menu items when it comes to the holidays. For the winter holidays they ass a toasted white chocolate mocha coffee, chestnut lattes, caramel brulee, gingerbread and eggnog lattes, and a peppermint mocha hot  chocolate. Shown in the picture are there winter holiday beverages. They also change their cups to red, white and green to get their customers into the holiday spirit. The biggest difference between their drink options is the coolata and frappucinos. They are both cold drinks but they flavor options are different. They also taste very different. 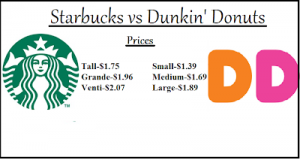 When comparing prices, Dunkin Donuts is much lower. A large sized latte at Dunkin donuts costs around $2.49. However a venti latte at Starbucks costs $4.15 That is almost $2 more than Dunkin. Starbucks food menu is also pricier. A bacon, cheddar and egg croissant costs $4.75 while in Dunkin a bacon egg and cheese is only $3.59. The figure up above is comparing regular iced coffee prices at both stores. Without including any extra flavoring, Dunkin Donuts is cheaper by around 30 cents. Although it seems like a small difference, it can add up. If your like me and you get a cup of coffee everyday then saving 30 cents can mean a lot in the long run. Hypothetically if you get Dunkin Donuts instead of Starbucks everyday for a year you are saving around $110 (365x.3). 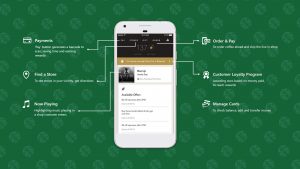 This brings us to the topic of each coffee shops target audiences. Starbucks target audience is mostly men and women aged 18 to 44. They appeal to an older target audience by offering certain types of coffees. Also Starbucks customers tend to be people of higher income who have professional careers. Starbucks is very attractive to younger people because it has a hip type of decor and offers free wifi. You will often see college students or even high school students sitting in Starbucks and studying. According to the Starbucks website they want to create a welcoming and familiar place for people to connect and socialize. Starbucks creates a more “loungy” atmosphere. If you look at the picture of the inside of a store the inside is quite big with a lot of places to sit. It looks very cozy and like a place you would want to sit and chat with your friends. 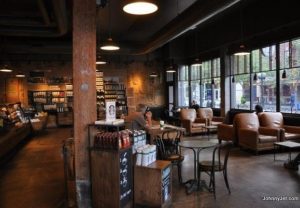 If you look at the picture on the right there are couches and the lights are dim so it makes a cozy atmosphere.

Dunkin Donuts slogan is “America runs on Dunkin.” Their food and coffee is meant to be grabbed as people are on their way to work or school. Unlike Starbucks where they want you to sit and talk with your friends. Because of this fast paced environment they want to create, most Dunkin Donuts are extremely small. Most location have about three to four tables. Some locations don’t even have a place to sit like the location near Baruch College on the corner of 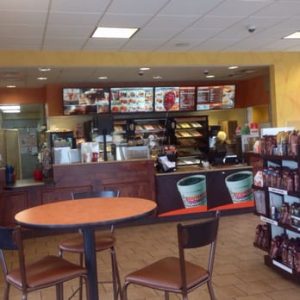 E23rd and Lexington Avenue. Other Dunkin Donuts sometimes don’t even have an official store where people can walk in, they have a window where you walk up and place your order. These layouts make sense because they want to create an atmosphere where you grab your coffee and donut and go on with your day. If yo u look at the picture on the left, this Dunkin Donuts is very small with only one table.

Determining which one is better depends on personal preference. It depends which type of coffee you want or which type of food you’re in the mood for or how much you are willing to spend. Personally,  I prefer Dunkin Donuts because it is perfect to grab quickly in between classes. When looking at food options, drink options, prices, apps and atmosphere, Dunkin Donuts is looking like a winner to me.

One thought on “Starbucks vs. Dunkin”