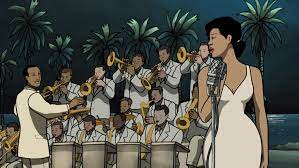 Following the tradition of the Afro-Caribbean ballad, the bolero, Chico and Rita is the story of the romantic and musical encounters and misencounters between a young piano player with big dreams and Rita, a singer with an extraordinary voice.  Their journey as lovers and at times musical collaborators brings heartache and torment as they deal with life in pre-revolutionary, US-(economically) controlled Cuba, and later in the diaspora.

ASYNCHRONOUS ASSIGNMENT (Deadline 2/8 before the class)

1. Rent and Watch the film Chico and Rita here or via other screening platforms.

2. In the comment section down below answer ONE of the following prompts (2oo-words minimum) that integrate the reading by Jairo Moreno “Bauza-Gillespie-Latin Jazz: Difference, Modernity, and the Black Caribbean.”

Jairo Moreno describes Latin jazz origins as a “musicoaesthetic experimentation by Black Cubans and Black North Americans” (178). How Chico and Rita presents these collaborations? Refer to specific examples from the film.

Moreno proposes the notion of the “Black Caribbean” as a phenomenon inscribed “in the particular temporal [time] and spatial [space] dislocations of a North American modernity… a tense and dynamic syncopation [overlapping] of sonic and cultural histories and temporalities” (178). What examples from the film can you bring to illustrate the multiple spaces and dislocations of the Black Caribbean?

Describe the ways Chico and Rita showcases New York as an “obligatory destination of sorts for musical pilgrims and also for those interested in incorporating themselves into a rapidly emerging international market centered in and around United States mass culture” (Moreno 179)?

The rapid growth of the nation’s Latino community has sparked a long and ongoing national debate over immigration, yet the reality is that many of us know little about the true roots of migration or the powerful forces that brought so many immigrants from Latin America to the United States.

Have you been taught about the US as an empire before?

Were you aware of the history of US intervention in Latin America before watching the documentary?

.Imperialism is a policy or ideology of extending a country’s rule over foreign nations, often by military force or by gaining political and economic control of other areas.

.Colonialism is the policy of a country seeking to extend or retain its authority over other people or territories, generally with the aim of economic dominance. In the process, colonizers may impose their religion, economics, and other cultural practices on the Indigenous people.

.Neocolonialism is the practice of using capitalism, globalization, and cultural imperialism to influence a developing country instead of the previous colonial methods of direct military control or indirect political control.

Based on the landmark book (now in its third updated edition) by journalist Juan González, the award-winning documentary Harvest of Empire explores the hidden history of US Latine/x communities and takes an unflinching look at the role that US military actions and economic interests played in triggering unprecedented waves of migration from the Caribbean, Central America, and Mexico.

.The wars for territorial expansion gave the U.S. control of Puerto Rico, Cuba, and half of México.

A pull factor is something that pulls a person to immigrate to another country. Examples of pull factors are job or education opportunities, religious freedom, and a cheaper living situation.

A push factor is a reason why people have to leave their home countries, such as war, famine, persecution, or violence.

What pull and push factors did you identify in the documentary? What is the difference between a refugee and an immigrant? What commonalities can we find between the different Latinx migrant groups? What issues do they face upon arrival/ what contributions do they add to the United States?

Bring concrete examples from the documentary.

Expand on one of the following quotes

How do these three quotes from the documentary intersect? How would you summarize their messages?

.“If what exists in Guatemala [Latin America] is persecution, murder, killing, if what you have is insecurity, then I prefer to cross the border and go to a place where I feel safer.” -Rigoberta Menchú, human rights activist, Nobel Prize winner

.“The instability that we [the United States] have contributed to creates the kind of chaos and disarray that leads to more immigration. Because you can argue that if we move into these societies, and contribute to this dysfunction, we have a moral obligation to help the people who feel unsafe in the situations that we, in part, have created.” -Melvin Goodman, former CIA Division Chief

*Please, keep the discussion alive. If you noticed that your classmates have repeated many times the same country, pick a different one to extend the conversation. *

Initial Chat with a Partner

Were you born in the US, the Caribbean, or Latin America? Where? Did you migrate to New York? When? From where? Where is your ancestral land? Do you still have contact with it? Do you belong to a diasporic community here in NYC? Where is home for you?

Group Discussion: Debriefing on the Syllabus

What struck your attention? What interested you the most about it? What question(s) do you have?

How would you describe Princess Nokia’s audiovisual/lyrical understanding of diaspora? What type of affinities do they express in the video? What type of cultural retention do they practice?

Beyond grades and the requirement of an institution, what does (Afro) diasporic study implies?