In 1990s Nestlé faced significant challenges in its market growth. Despite of the stagnant population in western countries the balance of power was increasing from large scale manufacturers like Nestlé, toward supermarkets and discounted chain stores. In result, Nestlé decided to lessen its focus on developed markets like North America and its home based market in Switzerland to emerging market like India and China.

The driving force behind the decision of expanding its market share in emerging market is simple, as the population grows and government decisions favoring market economies brings attractive business opportunities for public living at intermediate income.

Although many of the counties are still living under poverty line, even living on $1 per day shows optimistic signs for the future markets.  For example: as the current economic forecasts continues, there will be 9 billion people living on this planet as compare to today’s population of $7 billion today, and coincidently the increase in population is all in developing countries.

Nestlé uses the strategy which correlates the ratio of increase in income to use of branded food products, which means as a person earns more and has less time for making food in his/her home, they will automatically substitute for branded products.

In general the company’s strategy has been to enter emerging markets early before its competitors and build a substantial customer base by selling products which suit the local population such as infant formula, milk, and noodles. Nestlé narrows down its market share to many small niche markets, as opposed to general or one for all strategies. Nestlé keeps the goal of commanding the niche markets by gaining at least 85% of market share in every food product it launches.  For example, by pursuing such a strategy, 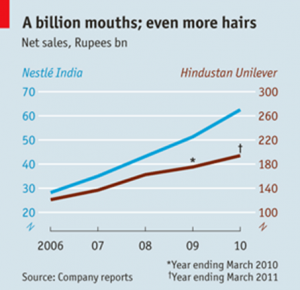 Customization is the key to Nestlé’s global brand identity rather than universalism, which means Nestlé, uses global brand identity but, from the internal point of view, it uses local ingredients and other technologies that resonate with the local environment and brand name that is known globally. The customization of Nestlé’s products causes many hindrances in carrying out its distribution of products from local farmers to factories. For example, in Nigeria the infrastructure placed is crumbling, trucks are old and political conditions are not suitable to carry out the processes successfully, so Nestlé adopted a new strategy to deliver its products to local warehouses which are

The execution of the strategy matches the planning of the strategy which is to plan globally and implement locally. Nestlé gives autonomy to its local branches based in different countries to make pricing decisions, and distribution decisions. Nestlé has expanded its growth by diversifying its product base to tomato ketchup and wheat base products such as noodle and tofu. Nestlé has expanded into 5 countries and expects to supply all food products throughout the regions namely, Turkey, Egypt, Syria, Dubai and Saudi Arabia.

Nestlé is also buying local companies in China and adapting its own portfolio for the Chinese market. Since many Chinese find coffee too bitter for their liking, Nestlé is working on a new “formula” to offer Smoovlatte, a coffee drink that tastes like melted ice cream. The company wants to be seen as a company that makes healthy food. As Janet Voûte, Nestlé’s global head of public affairs, said “it is a core business strategy” (The Economist). 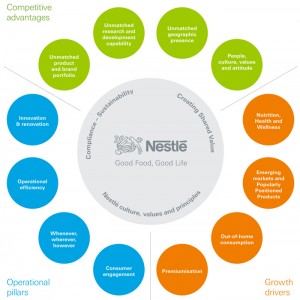 Nestlé has used its brand name as strength to generate sales and to expand its market share, which includes it customization of products to fit its target market’s profile. Although Nestlé has not always started from scratch, the company has used acquisition as a penetration strategy to expand and penetrate new international markets, which eliminates any local barriers to its competition. A few weaknesses which are related to the company’s quality measure resulting in product recalls. The company has decentralized its strategy units into 7 subunits in charge for different product lines, for instance, one – for coffee and beverages; another one focuses on ice cream and milk products. Nestlé brings its management level employees all around the world for 2-3 week training in its headquarters in Switzerland to familiarize them with their global culture, strategy and given them access to the company’s top management.

Hello Hello
View all posts by Jaffery →
This entry was posted in MNE profile final. Bookmark the permalink.