“I just felt like when I was relating my problems to the counselor, it felt like I was talking to a stranger,” said Edward.

Edward, who requested that his last name not be published, is a Chinese-American student diagnosed with depression. Studies conducted throughout the past decade indicate that he is one of a very small number of Chinese-Americans who have sought professional, medical help for his mental illness.

Statistics compiled by the American Psychological Association show that Asian American college students have a higher rate of suicidal thoughts than their non-Asian counterparts with the rate of 12.44 per 100,000 for Asian Americans 20-24 years of age.

The New York University School of Medicine’s Institute of Community Health and Research and Mental Health Services Research have both found that in Chinese immigrant communities, the majority of Chinese Americans with mental illnesses go undiagnosed and untreated due to cultural norms and beliefs that clash with Western medical paradigm.

“I know she was a professional and all, but it was basically [the counselor’s] job to help me,” said Edward. “She was getting paid for it.”

Differing views on how to treat and manage mental illnesses causes friction between East and West.  The Western model of psychotherapy of exploring negative thoughts would be counterproductive in the eyes of the Chinese. The Chinese believe it is detrimental for an individual to dwell on negative thoughts and feelings.

“People view those with mental illnesses in a very negative way,” said Huang. “Families will try to keep it very quiet because they fear the shame that will come.”

Chinese immigrants and Chinese Americans forgo mental health care due to a variety of factors. One is a concept in Chinese culture that can be translated as “face.” Similar to pride or honor in Western culture, this concept can permeate Chinese life and influences an individual’s actions or inactions. It is important to note that “face” is tied closely with the family name.

“Families who have a member with a mental illness usually hide from the community,” said Li Yan, a recent immigrant from Guangdong. “They tend to avoid talking about the mentally ill and sometimes they may not go out at all because they believe they can’t be seen.”

Chinese culture is family- and community-oriented. Family includes not just immediate family but all those with ties to the family name. Individuality is a much weaker concept especially for the older generation. Failure or illness does not afflict just the individual but has an effect on the family as a whole. This, in turn, affects the family’s standing within the larger community.

The differences in culture are particularly evident for Chinese immigrants and their children., with the children suffering an even greater sense of cultural confusion.

“There is a stigma that you try to avoid,” said Edward. “We try to avoid professional help because we were brought up into thinking that we can control our actions.”

A study published in Culture, Medicine, and Psychiatry described a family confining a schizophrenic son until his symptoms became unmanageable. Seeking professional help only when the son became violent, the family distanced themselves from the son soon afterwards.

The problem is not a new one. A study published in 2001 in the journal Mental Health Services Research found that social stigma was the primary reason for not seeking medical help and that they tend to seek help within their own families to avoid having their name viewed negatively by others.

Depression and suicide are the two biggest mental health issues that affect the Chinese immigrant population. Statistics compiled by the Centers for Disease Control and Prevention show the national suicide rate for senior Asian/Pacific Islander women is 6.01 per 100,000. In New York City, that rate is 11.6 per 100,000, according to a report in the New York Times in 2006.

In 2005, there were 28 reported suicides among the Chinese immigrant population in New York City, according to the New York Coalition for Asian American Mental Health. However, the Office of Minority Health, an arm of the U.S. Department of Health and Human Services, suspects the actual number to be much higher.

Studies have shown that Chinese Americans tend to view mental illness as problems that can be solved through willpower and avoidance of suicidal thoughts. For example, in depression cases, the solution is to simply “not think the bad thoughts.”

Some psychiatric patients like Edward may take professional advice with caution as the doctors may have never experienced the mental illnesses they are trained to treat.

“They probably never have experienced what it feels like to have a deviant state of mind,” said Edward.

Huang, who oversaw psychiatric patients as a nurse in China, said that the belief system of the Chinese is detrimental to the success rate of any medicine or treatment for mental illness.

“By the time the patient is admitted, their circumstances have already advanced to the point where treatment becomes extremely difficult,” said Huang. “It’s just a headache for all those involved.”

Building a Bedrock for Fellow Immigrants 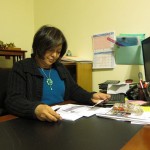 Jennie Smith left the comforts of her old life in the Philippines and arrived in Texas in 2001. At a petite height of 5’3” with bobbed black hair, Smith could pass for any typical Filipino homecare worker. Yet she arrived in America without any housework experience. “When I arrived from the Philippines, I didn’t know […]

By Laura Rossi and Chanelle Perrin “I feel like La Sirena is here to stay, its not time for us to die, “ Dina Leor said when asked about the fate of her Mexican folk art store, “its time for us to grow.” La Sirena, located in the heart of the East Village on Third […]

Flamenco music has been part of Alberto Alabedra’s life long before he began learning how to play it. His mother originates from Cordoba in Southern Spain, where Flamenco was created. His grandfather is from Seville and was a Flamenco expert. His father, although from the Catalonia part of Barcelona, has family roots in Tunisia many […]